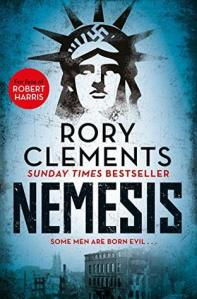 A race against time to unmask a Nazi spy

In a great English house, a young woman offers herself to one of the most powerful and influential figures in the land – but this is no ordinary seduction. She plans to ensure his death…

On holiday in France, Professor Tom Wilde discovers his brilliant student Marcus Marfield, who disappeared two years earlier to join the International Brigades in Spain, in the Le Vernet concentration camp in the foothills of the Pyrenees. Wilde secures his release just as German tanks roll into Poland.

Meanwhile, a U-boat sinks the liner Athenia in the Atlantic with many casualties, including Americans, onboard. Goebbels claims Churchill put a bomb in the ship to blame Germany and to lure America into the war.

As the various strands of an international conspiracy begin to unwind, Tom Wilde will find himself in great personal danger. For just who is Marcus Marfield? And where does his loyalty lie?

I really don’t know how Rory Clements keeps turning out books that are more brilliantly enjoyable than the last.  I was already a fan of the author’s books from his ‘John Shakespeare’ series set in Elizabethan England.  I greatly enjoyed Corpus, the first in his ‘Tom Wilde’ series set in the run-up to World War 2, and loved the second book, Nucleus. (Click on the book titles to read my spoiler-free reviews.) However, to my mind, Nemesis is the best yet.  I can’t even begin to bring myself to think about the possibility this might be the last in the series…

The opening chapters of the book introduce a number of different characters and plot strands, including some real-life public figures.  Those familiar with previous books won’t be surprised to know that the various strands are skilfully woven together with one or two surprises delivered among the way, all building to a breathless climax and some memorable closing scenes.

The book takes the reader on a journey from the aftermath of the Spanish Civil War, to France, the west coast of Ireland, the streets and colleges of Cambridge and its surrounding countryside.  Mistaken identity, bluff and double bluff, high speed chases, sticky situations and a character who is the embodiment of pure evil – the story has it all.  And, of course, it wouldn’t be a Rory Clements book without someone completely off your radar turning out to be not quite who you thought they were.   As one character remarks to Tom Wilde, ‘You’ve studied Walsingham.  When someone goes undercover, they must adopt a convincing persona.’

Behind the micro detail of the plot is the macro of the wider political situation as factions manoeuvre behind the scenes to try to influence their countries’ response to Germany’s aggression.   As a friend reminds Tom, ‘This is a propaganda war.’  There are tender moments as well.  I don’t suppose I’ll be the only reader hoping that the prayers of one character are answered: ‘Dear God, he thought, bring this woman through, and I’ll never doubt you again’.

I was so glad to see Tom and Lydia maintaining their formidable partnership.  OK, so I have a bit of a crush on Tom.  Perhaps it’s that combination of a historian’s analytical brain and the well-honed boxer’s body trained to react quickly that does it.  But I also absolutely love the character of Lydia: intelligent, brave, resourceful and independent-minded.  In Nemesis, change is on the horizon for both of them.  How will they respond given events of the past?

Never one to waste a good line, I’ll steal from own review of Nucleus and say that when it comes to historical thrillers Nemesis has ‘more thrills than a 100mph burn-up on Tom Wilde’s trusty Rudge Special’.  You’ve worked out I loved it, right?

I received a review copy courtesy of publishers, Bonnier Zaffre, and NetGalley.

Rory Clements has had a long and successful newspaper career, including being features editor and associate editor of Today, editor of the Daily Mail’s Good Health Pages, and editor of the health section at the Evening Standard.