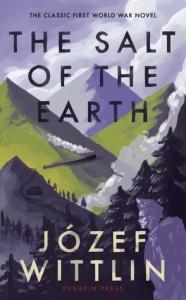 At the beginning of the twentieth century the villagers of the Carpathian mountains lead a simple life, much as they have always done. The modern world has yet to reach the inhabitants of this isolated and remote region of the Habsburg Empire. Among them is Piotr, a bandy-legged peasant, who wants nothing more from life than an official railway cap, a cottage with a mouse-trap and cheese, and a bride with a dowry.

But then the First World War comes to the mountains, and Piotr is drafted into the army. All the weight of imperial authority is used to mould him into an unthinking fighting machine, so that the bewildered peasant can be forced to fight a war as he does not understand, for interests other than his own.

Find The Salt of the Earth on Goodreads

The Salt of the Earth is described by the publishers as ‘a classic war novel, a powerful pacifist tale about the consequences of war on ordinary men’.  Although I had never heard of the book or the author prior to coming across it on NetGalley, I can say that it certainly lives up to that description.  If you care to look for equivalents these probably include modern classics such as All Quiet on the Western Front by Erich Maria Remarque, Memoirs of an Infantry Officer by Siegfried Sassoon and Goodbye to All That by Robert Graves.  However, because of its mordant humour, dark satire and ridiculing of those in positions of authority, it also made me think of the film Oh! What a Lovely War.

The book satirizes the absurdities of war and the pompousness, self-importance and (often) ineptitude of those in positions of authority.  These include: Emperor Franz Joseph, ruler of the Austro-Hungarian Empire, presented as a buffoon-like figure, full of puffed-up pride who shows no hesitation in consigning hundreds of thousands of his citizens to war and certain death; and Regimental Sergeant-Major Bachmatiuk, ‘the fanatical expert and high priest of Military Discipline’ who sets more store by precise adherence to military regulations than to the welfare of his soldiers.

The only sympathetic character is poor Piotr, something of an ‘Everyman’ figure.  An illiterate peasant unable to tell his left from his right, he is nonetheless, like many of his fellow Hutsul villagers, drafted into the army of the Emperor.  Piotr is determined to do his duty even though it becomes obvious his trust of those in authority is completely misplaced.  They don’t value him as a human being; he’s just another cog in the machine of war.

I mentioned previously the dark humour and satire in the book, exemplified by the following passage: ‘Newspapers throughout the monarchy were publishing enthusiastic reports from the “theatres of war”, which differ from other theatres in that the actors are also the audience and the audience are the actors.  Every day, images of their directors and prima donnas of the war looked out at you from the newsprint, profiles of old men in uniform, avidly seeking applause, flaunting their immortality gained at the expense of the deaths of other.’

Because the book is the first in a planned trilogy which was never completed, the reader doesn’t get to learn the fate of poor Piotr, although it is probably correct to assume it wouldn’t have been a happy one (like so many millions of others).

The Salt of the Earth has a fable like quality at time, some imaginative descriptive writing and a dark undertone, all of which it seemed to me was rendered in an accomplished manner by the translator, Patrick Corness.

I received a review copy courtesy of publishers, Pushkin Press, and NetGalley.

Try something similar… less satirical but no less tragic, The Winter Soldier by Daniel Mason (read my review here)

5 thoughts on “Book Review: The Salt of the Earth by Jozéf Wittlin”