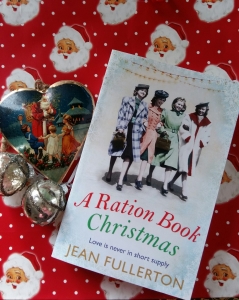 In the darkest days of the Blitz, Christmas is more important than ever.

With Christmas approaching, the Brogan family of London’s East End are braving the horrors of the Blitz. With the men away fighting for King and Country and the ever-present dangers of the German Luftwaffe’s nightly reign of death and destruction, the family must do all they can to keep a stiff upper lip.

For Jo, the youngest of the Brogan sisters, the perils of war also offer a new-found freedom. Jo falls in love with Tommy, a man known for his dangerous reputation as much as his charm. But as the falling bombs devastate their neighbourhood and rationing begins to bite, will the Brogans manage to pull together a traditional family Christmas? And will Jo find the love and security she seeks in a time of such grave peril?

A Ration Book Christmas is a heart-warming and dramatic story of daily life in the East End of London during the Blitz.  The author creates a convincing sense of the period and of the East End.  For example, I loved the scenes set in a traditional pie and mash shop with its ‘steaming vats of stewed eels’.

At the heart of the book is the story of erstwhile sweethearts, Jo Brogan and Tommy Sweete.  For them the course of true love is definitely not smooth, not helped by the misguided (or downright malicious) intervention of people who think they know what’s best for them.   And they find themselves at the mercy of events as the war separates Jo and Tommy.  But might it also throw them together again?

Jo engages the reader’s sympathy from the moment we first meet her, standing up for her little brother Billy.  Aside from Tommy, her family and their East End home mean everything to her. ‘For Jo, home was streets  of two-up two-down houses packed so tightly you could hear your neighbours arguing after chucking-out time on a Saturday night. […] home was the sour smell of simmering hops from the Charlton Brewery or, if the wind was blowing up the Thames, the smell of the sea.  Home was where the rain glistened on the cobbled streets after a storm and each front door has a scrubbed white step denoting the diligence of the women of the house.’

Tommy and his brother Reggie had the same difficult childhood but the experience has propelled them down different paths; a choice that threatens to bring them into conflict not only with each other but with the forces of law and order.  Their story illustrates there was a darker side to the war as well: the black market, looting and criminal opportunities offered by the blackout and curfews.

However, mostly the book conveys the courage and fortitude of those who lived through this turbulent and dangerous time in our country’s history.  Alongside those on active service in the Army, Navy and Air Force (and in necessarily less conspicuous but just as dangerous roles), the Brogans and other families are involved in work on the ‘Home Front’ that is often just as dangerous: fire-watching and dealing with incendiary devices; working as drivers and First Aid assistants for St. John’s Ambulance; serving in the Auxiliary Fire Service and heavy rescue crews.

The book gives a real sense of the indiscriminate carnage of the Blitz – innocent families caught in explosions and collapsing buildings – but also the bravery of those attempting to rescue and care for them.   Ingenuity was needed as well with horse boxes pressed into service as mobile dressing stations and boy scouts used as runners.

Along with the danger of bombing raids and the ever-present fear of invasion, there’s the daily struggle to cope with food shortages and rationing.  ‘Since the introduction of rationing, it took the best part of the day just to find your basic necessities.  Once greengrocer might have potatoes but no carrots, so you’d have to go to another shop for those and possibly another for cabbage.  Having tracked down whatever it was you were after, you then had to queue with your fingers crossed they wouldn’t sell out before you got to the front.’

The book is not all doom and gloom though.  There’s some much-needed humour to lighten the mood.  For example, the wonderfully named Stella Miggles is described as ‘the girl with the slackest knicker elastic west of Bow Bridge’.  There are some fabulous female characters including Jo, Eddie, Ida and Queenie, emphasising the vital role women performed in time of war.  My absolute favourite scene in the book is Queenie’s response when Aunt Pearl comes looking for Billy.  Readers averse to a bit of lavatorial humour and earthy language should skip the following excerpt!

Marching across to the privy, Pearl banged on the door.
‘Feck off,’  Queenie shouted back. ‘I’m having a shite.’
‘I’m looking for Billy,’ Pearl bawled through the outhouse door. ‘I know he’s-‘
A rip-roaring fart cut across her words.
‘For the love of mercy,’ hollered Queenie from inside the toilet, ‘will you not leave me in peace to grapple with the squits?’

As a reader not usually drawn to books with romantic storylines, I nonetheless found myself drawn into the ups and downs of the romance between Jo and Tommy whilst being similarly engaged by the historical detail and atmosphere of wartime London.  I enjoyed the period detail about the food (Carnation milk, Ovaltine, pease pudding or fig rolls anyone?), the music and the clothing of the time. Included at the back of the book are recipes that the formidable matriarch of the Brogan clan, Ida, might have used, including for Christmas dinner – a lovely bonus.

Finally, I really liked that the cover of the book appears to use a vintage image from the period rather than present-day models who, to my mind, even if dressed in costumes from the period, somehow never look quite authentically of that time.

Read Jean Fullerton’s thoughts on why sagas, such as the ones she writes, should be considered part of the historical fiction genre in the latest issue of Historia, the magazine of the Historical Writers’ Association.

I received a review copy courtesy of publishers, Corvus, and Readers First. 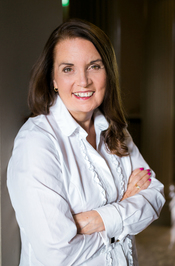 Jean writes: I was born into a large, East End family and grew up in the overcrowded streets clustered around the Tower of London. I still live in East London, just five miles from where I was born. I feel that it is that my background that gives my historical East London stories their distinctive authenticity.

I first fell in love with history at school when I read Anya Seton’s book Katherine. Since then I have read everything I can about English history but I am particularly fascinated by the 18th and 19th century and my books are set in this period. I just love my native city and the East End in particular which is why I write stories to bring that vibrant area of London alive.

I am also passionate about historical accuracy and I enjoy researching the details almost as much as weaving the story. If one of my characters walks down a street you can be assured that that street actually existed. Take a look at Jean’s East End and see the actual location where my characters played out their stories. [Photo credit: Goodreads author page]

One thought on “Book Review: A Ration Book Christmas by Jean Fullerton”