It’s the first Saturday of the month so it’s 6 Degrees of Separation time!

Here’s how it works: on the first Saturday of every month, a book is chosen as a starting point by Kate at Books Are My Favourite and Best and linked to six other books to form a chain. Readers and bloggers are invited to join in by creating their own ‘chain’ leading from the selected book.

This month’s starting book is Vanity Fair by William Makepeace Thackeray. Click on the title to read the book description on Goodreads or my review, as appropriate.

Vanity Fair follows the fortunes of two contrasting women: Becky Sharp, an orphan whose only resources are her vast ambitions, her native wit, and her loose morals; and her schoolmate Amelia Sedley, the pampered daughter of a wealthy family.

Vanity Fair is one of the places visited on the journey Christian undertakes in John Bunyan’s allegory, The Pilgrim’s Progress.

The Pilgrim’s Progress was a very influential text for author, John Buchan; from his earliest childhood through to the end of his life. In his autobiography, Memory-Hold-The-Door (published as Pilgrim’s Way in the United States), Buchan describes The Pilgrim’s Progress as ‘his constant companion’ noting, ‘Even today I think that, if the text were lost, I could restore most of it from memory’.

In Witch Wood, Buchan’s 1927 historical novel set in seventeenth century Scotland, the book’s hero, moderate Presbyterian minister David Sempill finds himself in ‘the Slough of Despond’ (another location in The Pilgrim’s Progress) as he battles religious extremists within his parish on the one hand and black magic on the other.

But finally, to the John Buchan novel which has the most obvious link to The Pilgrim’s Progress – Mr. Standfast (1919).  As well as its title, which references a character in Bunyan’s text, The Pilgrim’s Progress has a physical role in Mr. Standfast, acting variously as a prize, a code-book and a source of moral comfort.  It also provides a means of private communication between hero, Richard Hannay, and his comrades.  For example, at one point, Hannay sends the message: ‘”If you see Miss Lamington you can tell her I’m past the Hill Difficulty”.  Yes, that’s a reference to another location in The Pilgrim’s Progress. 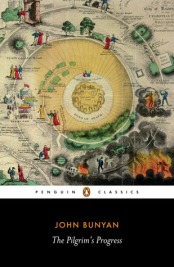 So from Vanity Fair, we’ve made a John Buchan themed ‘pilgrim’s progress’ from John Bunyan’s famous allegory to wartime adventure.  Where did your literary connections take you this month?

Next month’s starting book is an all time favourite – A Christmas Carol by Charles Dickens.

4 thoughts on “Six Degrees of Separation: From Vanity Fair to Mr. Standfast”