This is a longer version of a review that first appeared in the Henley Standard on Friday 12th October 2018.  It is based on notes I took during the event and my own recollections. Any errors in recording views expressed during the discussion are my own.

Could there be a more fitting location to hear author Diane Setterfield talk about her forthcoming book Once Upon a River than sailing aboard The Hibernia along the River Thames, the setting of the book?  Set in the 1870s, the book involves the unexpected arrival of a four- year-old girl at an inn on the Thames where locals gather to tell stories on winter evenings.

Responding to writer and journalist Hannah Beckerman’s perceptive questions, Diane revealed the inspiration for the novel was a newspaper article she read as a child about a boy pulled from the water seemingly lifeless who later miraculously recovered, and a riverside walk with her parents many years later where the crumbling bank and angry looking river made her feel unexpectedly afraid.  Diane observed that one idea is never enough for a book; it needs a series of idea to create a spark sufficient to fuel an entire novel.

Hannah asked about the central role the river plays in the book. Diane said she’d been struck by the unpredictability of a river; that it can be helpful but also dangerous, even on a glorious summer day.  She likened it to a ‘capricious deity to be appeased’, noting that through history rivers have been associated with religion, mythology and supernatural beliefs as evidenced by the sacrificial objects often found when rivers are dredged.  Diane felt people are drawn to rivers at moments of high emotion.  There’s a sense of something powerful in the movement of a river and the fact that it’s ever-changing.

Hannah asked why Diane had chosen the particular section of the River Thames that features in the book.  Diane explained originally she was hoping for the story to stretch from the source of the river to the estuary but she’d realised that in the period the book is set most ordinary people lived and died within ten miles of where they were born so she needed to confine it to a smaller area.  The stretch she’d selected was one she found interesting; a section that was navigable and used for trade but close to the point beyond which it was not navigable… borderline territory, as it were.

At this point, Diane read from a pivotal scene that occurs early in the book.

Hannah noted that storytelling seems to be an important theme of the book.  Diane said she’d always had an interest (not just professional) in storytelling.  She observed that we all organise information, gossip, and so on into stories about ourselves and that humans are intrinsically ‘storytelling animals’.  The inn in the book is known for its storytelling, in the same way as another pub might be known for music, for peace and quiet… or for brawling!  The girl who arrives at the inn becomes the subject of different stories about who she might be.  In some of these she becomes a conduit for people’s grief or loss.  Diane said she was intrigued by the idea of the central character in a book being an empty space, a void who triggers others to act but to whom the reader never has access. She said she loved books where the central character remains a mystery such as The Photograph by Penelope Lively.  The fact the character in Once Upon a River is a child she felt enhances this.  She is, she said, ‘a wonderful little parcel of mystery’.

Hannah mentioned another of the book’s theme: parenthood and what it entails, both the joy and the heartbreak.  Diane said the theme found her, as it were, and reflected her own ambivalence on the subject which she gave to the character of Rita in the book.  Rita is a midwife and Diane said she’d been surprised to learn from a midwife friend there is a higher rate of childlessness amongst midwives.  Hannah asked if there was a historical basis for someone like Rita, who seems to do very much her own thing.  Diane admitted Rita is something of a hybrid.  Her background and experience is historically plausible but her attitude, confidence, preparedness to challenge and adoption of a ‘scientific’ approach is probably less so.  Although she writes historical novels, Diane said she didn’t see herself as a historical novelist of the Hilary Mantel sort.   Diane wants her characters to appear plausible to a modern reader and she’s not trying to reproduce historical accuracy to the nth degree.

The book is set in the 1870s, a time when science was overturning many previously held beliefs.  Hannah observed it was brilliant terrain for storytelling.  Diane agreed, saying it was a period when new ways of understanding humanity were being developed but old wives’ tales and old beliefs still held sway.

Asked how she approaches developing the characters in her books, Diane replied ‘by giving them time’.  In her experience, characters emerge by themselves during the process of writing, often surprising her as they do so.  She just has to do ‘what the story wants’.  Although she never bases her characters on real people, sometimes she does include a tiny aspect of someone she knows in a character.

Returning to the theme of storytelling, Hannah observed that as readers we seem to love stories about stories.  Diane agreed there’s a kind of immortality to stories; they can live on after the individuals who told them have died.  For example, she said there was a great tradition of joke telling in her family.

Hannah asked how present the reader is in Diane’s mind when she’s writing a book.  Diane said she was constantly oscillating between writing and putting herself inside the head of the reader, asking herself questions such as: how effective is this to my reader? have I achieved what I set out to?  Diane likened the process to crafting a necklace.  The scenes in a book are like beads lined up in a row but until she knows the heart of the story they’re just a lot of beads that would fall apart if picked up.  They have to be threaded together before it works.  (This sort of observation, I would contend, is what sets writers apart from the rest of us!)  In Once Upon a River, she confessed this process took some time and she felt despondent that she couldn’t see the central theme.  When it came, it was a happy day and felt like magic.  The central thread was that all the characters have suffered loss and have one thing they want restored to how it was before.  There comes a realisation it doesn’t have to be that way;  something taken away will be restored but maybe in a different way to how they imagined.

At this point, Hannah invited questions from the audience.  Diane was asked which was her favourite of the three novels she’s written.  To much laughter, she replied ‘the fourth one’. (Great news for fans of her books that there is another one on the way.)  Asked who her own favourite author was, she replied Jim Crace.  Diane mentioned she was about to start reading Andrew Miller’s latest book, Now We Shall Be Entirely Free.   Her biggest literary influence?  Diane cited Wilkie Collins’ book The Woman in White.  As Diane has previously commented, she is ‘a reader first, a writer second.’

Diane’s first book was the New York Times bestseller The Thirteenth Tale. Asked what was her feeling about this early success, Diane joked ‘Relief!’ Having left a successful academic career to concentrate on writing, she said her mum had been concerned Diane had consigned herself to penury once again.  She talked about her experience of being suddenly thrust into the limelight, undertaking arduous book tours and speaking at reader events – the ‘author in the world’ part of the job, as she termed it.

Once back at Hobbs Boat Yard, I and other members of the audience stepped ashore clutching  our precious (signed) proof copies of Once Upon a River.  I found Diane a fascinating speaker and I’m really looking forward to reading Once Upon a River and sharing my review as part of the blog tour for the book in December.  Finally, I’d like to give a shout-out to Hannah Beckerman for her perceptive questions, clearly derived from a thoughtful and thorough reading of the book. 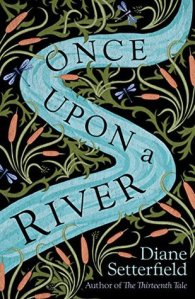 A dark midwinter’s night in an ancient inn on the Thames. The regulars are entertaining themselves by telling stories when the door bursts open on an injured stranger. In his arms is the drowned corpse of a little child.  Hours later the dead girl stirs, takes a breath and returns to life.

Is it a miracle? Is it magic? Or can it be explained by science?

Replete with folklore, suspense and romance, as well as with the urgent scientific curiosity of the Darwinian age, Once Upon a River is as richly atmospheric as Setterfield’s bestseller The Thirteenth Tale.

Find Once Upon a River Goodreads 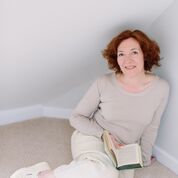 Diane Setterfield’s bestselling novel, The Thirteenth Tale (2006) was published in 38 countries worldwide and has sold more than three million copies. It was number one in The New York Times hardback fiction list for three weeks and is enjoyed as much for being ‘a love letter to reading’ as for its mystery and style. Her second novel, Bellman & Black (2013) was a genre-defying tale of rooks and Victorian retail. January 2019 sees the publication of her new title, Once Upon a River, which has been called ‘bewitching’ and ‘enchanting’.

Born in Englefield, Berkshire in 1964, Diane spent most of her childhood in the nearby village of Theale.  Diane studied French Literature at the University of Bristol.  She taught English at the Institut Universitaire de Technologie and the Ecole nationale supérieure de Chimie, both in Mulhouse, France, and later lectured in French at the University of Central Lancashire in the UK. She left academia in the late 1990s to pursue writing.  Diane now lives in Oxford. When not writing she reads widely, and when not actually reading she is usually talking or thinking about reading. (Photo: Goodreads author page)