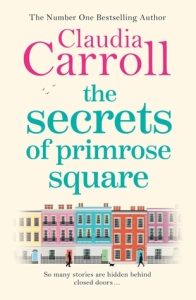 There are so many stories hidden behind closed doors . . .

It’s late at night and the rain is pouring down on the Dublin city streets. A mother is grieving for her dead child. She stands silently outside the home of the teenage boy she believes responsible. She watches…

In a kitchen on the same square, a girl waits anxiously for her mum to come home. She knows exactly where she is, but she knows she cannot reach her.

A few doors down, and a widow sits alone in her room. She has just delivered a bombshell to her family during dinner and her life is about to change forever.

And an aspiring theatre director has just moved in to a flat across the street. Her landlord is absent, but there are already things about him that don’t quite add up…

Find The Secrets of Primrose Square on Goodreads

I’ll let you into a secret.  The Secrets of Primrose Square is not the sort of book to which I’d normally be attracted.  I assumed it would be ‘chick lit’ (although I really don’t like that term) which is not a genre I generally read.   I know, a prejudice on my part potentially preventing me from reading some great books.  However, luckily, I read an extract from the opening chapters of The Secrets of Primrose Square on the Readers First website and found myself immediately drawn to the stories of Susan and Melissa.  In return for providing my ‘first impressions’, I was entered into their weekly prize draw and was fortunate enough to win a copy of the book.

Now let me tell you some secrets about the book itself…

You’re going to find Melissa tugging at your heart strings, both because of the situation in which she finds herself and the way she responds to it.  You’re going to wish you had a neighbour just like Jayne and that when you get to her age you have the courage to do what she does.  You’re also going to sympathise with her intensely once you meet her son, Jason, and daughter-in-law, Irene.   You’re going to hope you or anyone close to you never has to go through what Susan is going through.  You’re going to make some assumptions about some of the other characters that will probably turn out to be wrong.  Most of all, by the end of the book, you’re more than likely going to feel like you know Primrose Square as if you lived there yourself.

Some of the many things I enjoyed about the book are the way the author creates a distinctive narrative voice for each character, complete with Irish colloquialisms in many cases.   I also loved some of the humour.  For example, Jason’s initial encounter with Jayne’s new friend or the catty comments that fly to and fro between the actresses playing Lady Catherine de Bourgh and Mrs Bennett in the theatre production of Pride and Prejudice that aspiring theatre director, Nancy, is working on.  (It reminded me of the great scene in The Importance of Being Earnest where Cecily Cardew and Gwendolen Fairfax swap insults disguised as polite chitchat and Cecily deliberately gives Gwendolen sugar in her tea when she didn’t want sugar, and cake when she expressly asked for bread and butter.)

I’ll confess that I didn’t engage quite as much with the character of Nancy, although the behind the scenes detail of the work involved in a theatre production were fascinating and clearly informed by the author’s own experience.  The secret that Nancy is trying to leave behind in London by moving to Dublin I found a little underwhelming when finally revealed.  However, I loved the relationship she forms with Melissa.  If you’re anything like me though, it is the central story of Susan and the life-changing event her family have experienced that will keep you turning the pages.

The Secrets of Primrose Square is a story of finding a way through grief, the importance of a sense of community, having the courage to make a new start and the precious gift of female solidarity.  By turns it is heartbreaking and heart-warming.  I would say it’s the perfect feel-good read.

I received a review copy courtesy of publishers, Zaffre, and Readers First, in return for an honest and unbiased review.

Claudia was born in Dublin, where she still lives and works as an author and actress.  She is a graduate of UCD, the College of Music and of the Gaiety School of Acting. Since then she has worked extensively as an actress on the Irish stage, but is probably best known for her role as TV’s Nicola Prendergast in the long running Dublin soap opera, ‘Fair City.’

She’s a Sunday Times top ten bestselling author in the UK and a number one bestselling author in Ireland, selling more than a half a million copies in paperback alone.  To date Claudia has published fourteen novels, four of which have been optioned, two for movies and two for TV.  She’s currently hassling producers for a walk-on role, and is hoping they might even let her keep the costumes for free.

4 thoughts on “Book Review: The Secrets of Primrose Square by Claudia Carroll”