Throwback Thursday is a weekly meme originally created by Renee at It’s Book Talk.  It’s designed as an opportunity to share old favourites as well as books that we’ve finally got around to reading that were published over a year ago.

Today I’m revisiting a book that has been sitting in my TBR pile for quite a long time – Diamond Cut Diamond by Jane Jakeman.   It’s the fourth in the author’s ‘Lord Ambrose Mystery’ series, the previous books being Let There Be Blood, The Egyptian Coffin and Fool’s Gold.  Diamond Cut Diamond was published in January 2017 by Endeavour Media and you can find purchase links below.

As you will see from my review below, Diamond Cut Diamond was a really fun, light read.  The fact that it is fairly short was an added bonus. I don’t know about you but sometimes I just don’t feel in the mood to pick up a whopper of a book! 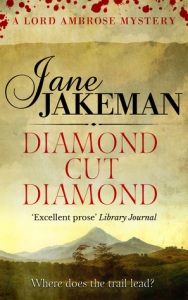 It is 1835, and Lord Ambrose Malfine is outside the walls of the ruined castle of Pribyslav in Bohemia. As he watches his horse graze, he contemplates how he got there…

The story begins at Lord Ambrose’s mansion, where he and Elisabeth are entertaining friends for dinner. They admire a beautiful necklace worn by the wife of Ambrose’s friend Dr Lawrence.  Later, the gentlemen learn that Lawrence has taken credit of £1,000 for the necklace. Elizabeth is shocked; her experience having told her the stones of the necklace are false, albeit very good fakes.

Ambrose takes it upon himself to find the jeweller who sold his friend the false stones. Whilst there, he is introduced to a countess who sold the original necklace to the jeweller and seems also to have been defrauded. As a reward for his services, the lady gives him a small key and a clue to the whereabouts of the lock it will open. This should perhaps have been the end of the matter, but Ambrose’s natural curiosity and gentlemanly behaviour result in him following the countess home, at a distance, and finding out from a local urchin that she is from Bohemia.  And thereby begins Lord Ambrose’s adventure in Bohemia…

Diamond Cut Diamond is a fun, lively historical mystery with reformed Regency rake, Lord Ambrose Malfine, as its engaging hero.   His instinctive curiosity is, luckily for him, indulged by love of his life, Elisabeth: “Well, Ambrose, I know you too well to try and persuade you to act against your nature.”  Soon Ambrose is setting off on the trail of the mystery countess he encountered whilst exposing the jeweller who sold his friend a fake diamond necklace.

His quest involves a journey to Bohemia that turns out to be more perilous than he imagined.  Before long it becomes clear Ambrose has a dangerous enemy on his trail, moreover one with few scruples.   However, as Ambrose admits himself, ‘I have this nature – the more I am warned against doing something, the greater my determination to do it.’   Thankfully, Ambrose gathers some useful allies along the way and there is an unexpected but very welcome encounter with an old friend.    This will prove vital in the exciting, explosive and dramatic climax to the book.

As well as the satisfying mystery, I really enjoyed the humour in the book, such as the running joke that Ambrose is frequently identified as an Englishmen by the quality of his footwear.  For example, on one occasion, a stranger remarks “I have not seen such fine boots.  You must be from London!”

I didn’t feel coming in at book four in the series had any impact on my enjoyment of the book.  In fact, I quite enjoyed spotting the little nuggets of information about events from earlier books the author included.   It did however have an impact on the state of my bookish wish-list because I added the three earlier titles to it as soon as I finished Diamond Cut Diamond!  They’ll be ideal for the next time I feel in need of a historical mystery pick-me-up.

Diamond Cut Diamond is part of my 20 Books of Summer and What’s In A Name reading challenges. 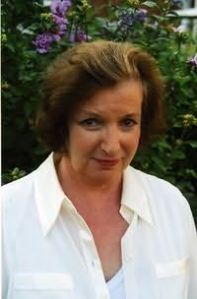 Jane Jakeman is an art historian who has travelled in the Mediterranean and the Middle East and has had numerous articles on art, food and travel published in newspapers and magazines, including The Independent, The Sunday Times and The Guardian. She studied English at the University of Birmingham and has a doctorate from Oxford University in the architectural history of Islamic Cairo. She lives in Oxford and is at present on the staff of the Bodleian Library. 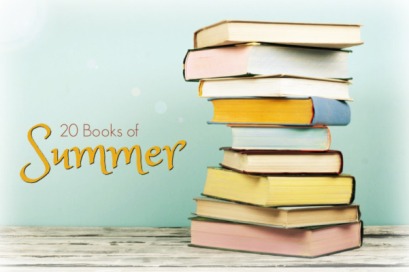 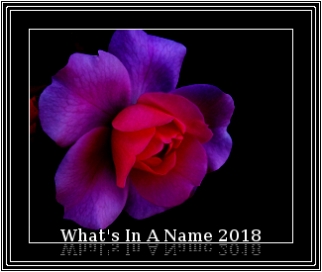