It’s so frustrating when authors contact you about fascinating sounding books and you know because of your already huge review pile it’s going to be quite a while until you can get to read them.  A case in point is Artist, Soldier, Lover, Muse by Arthur D. Hittner set in pre-war New York City.

However, I’m making amends by bringing you a fantastic guest post from Arthur about the challenge of capturing in words the inspiration that drives the creative process of an artist.  In his article, Arthur illustrates the approach he chose with two excerpts from the book and a wonderful painting by an artist definitely unknown to me.

If this has piqued your interest in Artist, Soldier, Lover, Muse, you can find purchase links below.

Freshly graduated from Yale in 1935, Henry J. Kapler parlays his talent, determination, and creative energy into a burgeoning art career in New York under the wing of artists such as Edward Hopper and Reginald Marsh.  The young artist first gains notoriety when his depiction of a symbolic, interracial handshake between ballplayers is attacked by a knife-wielding assailant at the Corcoran Gallery in Washington.

Yet even as his art star rises, his personal life turns precarious—and perilous—when his love for Fiona, a young WPA muralist, collides with his growing attraction to the exquisitely beautiful Alice, an ex-chorus girl who becomes his model and muse.  Alice is the girlfriend of Fiona’s cousin, Jake Powell, the hot-headed, hard-drinking outfielder for the New York Yankees whose jealousy explodes into abuse and rage, endangering the lives of all three.

While Henry wrestles with his complicated love life, he also struggles mightily to reconcile his pacifism with the rabid patriotism of his Jewish-Russian émigré father.  As war draws near, Henry faces two difficult choices, one of which could cost him his life.

I love art.  I’ve a particular affinity for the art of the Depression era, much of which is imbued with an emotional edge that reflects the perils of everyday existence during those difficult times.  In my debut novel Artist, Soldier, Lover, Muse I explore the creative mind of a struggling young painter in the New York City art world of the late 1930s.

How does a writer of historical fiction tap into the mind of an artist from another era?  I began by devouring the colorful accounts of the resourceful artists who practiced their craft in New York during the turbulent decade of the Thirties.  There can be no better source for the ambience of a time and place than the reminiscences of those who experienced it.  To further gauge the tenor of the times, I perused the Times—the historical database of The New York Times—whose articles offered a window into the events and controversies that shaped the lives of New Yorkers.  Armed with this knowledge, I could place my protagonist, the young artist Henry J. Kapler, in the midst of these events, as a participant, observer or commentator, as the story dictated.

But what of the creative act itself?  How do you capture on the written page the inspiration that drives the creative process?  In Artist, Soldier, Lover, Muse I utilized two distinct approaches to tap into the creative impulses of Henry Kapler.  One was to ponder an actual work of art and intuit the circumstances that may have brought it into being.  I’ll call this the Chevalier Method.  Tracy Chevalier created an entire novel from a single work of art in Girl With a Pearl Earring.  Consider, for example, the painting reproduced below.  It is the work of Harold J. Rabinovitz (1915-1944), a now obscure American artist whose life and work provided valuable inspiration for the fictional Henry Kapler. 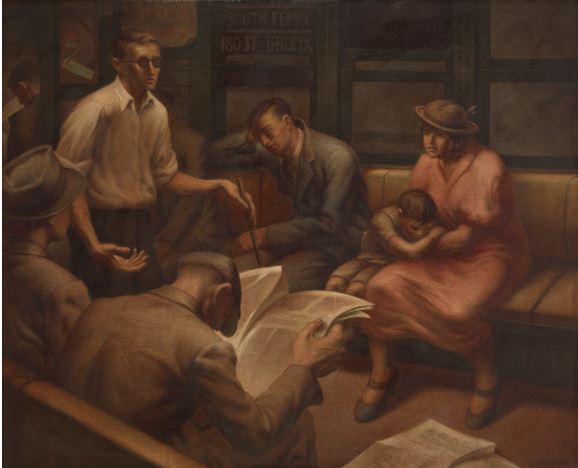 The following excerpt reflects how I imagined Henry might have approached the subject of this poignant work of art:

‘The Seventh Avenue Express was the subway Henry knew best.  It stopped at Fourteenth Street, running north to Harlem and southeast to Brooklyn.  With his sketchbook and a pocket full of tokens, Henry descended into the bowels of the city.  He remained submerged for the better part of two weeks, riding from one end of the line to the other, observing and sketching.  Surfacing only to eat, sleep, and attend his morning classes at the League, Henry became as much a part of the screeching, grimy, often creepy world of the underground as the foot-long rats that scampered through the stations like frantic commuters.

The stark interior of a subway car was the setting for Henry’s opus.  Marsh had tackled a similar subject earlier in Why Not Use the “L”, portraying the indifference of passengers in documentary fashion.  Henry would go further, injecting social commentary by staging a morality play within the confines of his canvas.

Henry sifted through scores of sketches for the characters to inhabit his composition.  He roughed out a scene depicting two seated men on the near side of the car to the left, one with his head buried in a newspaper and the other looking blankly ahead; a third man barely awake across the aisle, his elbow resting against the seat back, his right hand propping up his weary head; and a young mother sitting beside him, straining to rein in her fidgety son.  One last figure would complete the composition and supply the narrative: a sightless young man in shirtsleeves and dark glasses proceeding down the aisle toward the viewer, his left hand limply grasping a walking cane, his right palm turned upward in supplication.  It was an all-too-familiar scene, variations of which he’d witnessed repeatedly during his self-banishment underground: a group of passengers, distracted by their own burdens, studiously ignoring the entreaties of a man less fortunate as he passes by seeking charity.’

The second (and diametrically opposite) entrée into the creative mind of my protagonist was through the developing plotline, trusting that the story would inform Henry who would, in turn, create an artwork derived purely from my own imagination.  In Artist, Soldier, Lover, Muse  Henry’s muse, Alice Woodley, is a beautiful ex-chorus girl involved in an abusive relationship with a professional athlete named Jake Powell.

Consider this excerpt from Chapter Twenty-Two:

‘For much of the next forty-eight hours, the portrait of Alice consumed him.  He realized that what he’d started to paint from life, he was now painting from deep within himself.  What she’d told him, and how she’d spoken and acted, were as much a part of what he was now creating as the actuality of her physical being.  He remembered the fist Kuniyoshi had placed on the table in the classroom, and the shadow it cast.  He’d captured the actuality of his model in their session two days earlier, but it took the succeeding couple days of laborious effort for the truth to emerge.  He studied the painting closely.  What had begun as a likeness of an extraordinarily beautiful young woman had evolved into a portrait of both beauty and vulnerability.  This was not the hardened, streetwise woman that had surprised and disappointed him at the automat, although that was certainly a part of what she’d become.  There was much more—and it thrilled him to discover it peering out from the canvas.

Waiting was the title he chose for the painting.  It made sense to him.  He perceived a young woman waiting to make sense of her life, to comprehend and reconcile the choices she’d made, to find a path forward.’

In the end, the writer’s means for divining the artistic vision of his protagonist shouldn’t matter.  What matters is that his character’s creative impulses feel genuine to the reader.  The paintings portrayed in the novelist’s narrative should be equally accessible in the reader’s mind, whether the artwork has an existence in the real world or solely in the writer’s imagination.  Whether I’ve succeeded in transporting you into the creative mind of Henry Kapler is something only you can judge.  I invite you to read Artist, Soldier, Lover, Muse to decide for yourself.                                  © Arthur D. Hittner, 2018 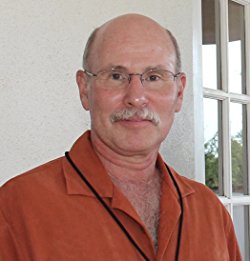 Arthur D. Hittner is the author of the historical novel Artist, Soldier, Lover, Muse and  Honus Wagner: The Life of Baseball’s ‘Flying Dutchman (McFarland, 1996), winner of the Seymour Medal awarded by the Society of American Baseball Research for the best book of baseball history or biography published in 1996.  Other books include At the Threshold of Brilliance:The Brief but Splendid Career of Harold J. Rabinovitz (The Rabinovitz Project, 2014), a biography and catalogue raisonne of a newly rediscovered master of American art of the Depression era and the irreverent travelogue, Cross-Country Chronicles: Road Trips Through the Art and Soul of America.

Mr. Hittner has also written about fine art subjects for Maine Antique Digest, Fine Art Connoisseur and Antiques & Fine Art and has served as a Trustee of the Danforth Museum of Art and the Tucson Museum of Art.