There was a packed house at Waterstones, Reading to hear local authors, Claire Dyer and Amanda Jennings, talk about their latest books, The Last Day (review coming soon!) and The Cliff House (read my review here).   You can find more information about both books plus purchase links further down this post.

After a glass of wine and some delicious canapés, the evening kicked off with questions from host for the evening, Bill Buckley of BBC Radio Berkshire.  Bill started off by asking Claire and Amanda to summarise their books, which they of course did most ably having probably done it thousands of times by now as part of promotional activity!

He then asked about their writing process – how much do they have planned from the beginning?  Claire said she creates the characters first and they then drive the story.  Really, she’s just sharing the journey with them.  For The Last Day, she started with one of the main characters, Honey, and then realised during the editing process that the story needed to be told in Vita’s voice as well.  Amanda said she’s much the same.  She starts with a group of characters, a central premise and a vague notion of where the story is going.  Usually she has in her mind five or six key scenes that she will write first and then the build the rest of the book around them.  Both Claire and Amanda confess that some of their best ideas come while doing other things: swimming, walking the dog, even in the middle of the night!

Bill asked how both of them got into writing.  Amanda said she loved writing and telling stories as a child but when school essays came back they were usually marked high for imagination but low for spelling and grammar so she never felt she was particularly good at English.   Initially she studied architecture at university before switching to history of art and rediscovered her love of writing.  Amanda admits writing a novel is hard but there is nothing to beat when you hit that ‘sweet spot’ and it just flows.    Claire says her compulsion to write comes from having a head – and a heart – full of stories and characters and wanting to share them with people.

Bill observed that in both books non-human ‘characters’, particularly houses, play a big role.  Amanda said the house in her book, ‘The Cliff House’ of the title, is central to the story.  Its location is important as well, ‘plonked’ on the cliff top dominating the local landscape.  She had in mind the kind of house where wealthy, glamorous people had wildly extravagant parties, like something out of The Great Gatsby.    Claire said she had her agent to thank for the advice to make the house a character in its own right in The Last Day and to create a feeling of claustrophobia.  A small house with three people crammed in it.

Closing this section of the evening, Bill asked both authors what they are working on next.  Claire said her next book is written and with her agent but wasn’t prepared to divulge anything more!  Amanda said she has 50,000 words written of a ‘dirty first draft’ (Amanda’s term!) but it needs a lot more work and research.

Bill then invited questions from the audience.  As Claire also writes poetry, one questioner was keen to know if she preferred that to writing fiction.  Like choosing between your children, answered Claire, because she loves both equally.  Another questioner remarked that both books would make marvellous TV series or films and there was some discussion about how the authors would feel about losing control of their work and who would be their ideal casting.

Claire was asked at what point she decided on the structure of the book with its multiple viewpoints and – every so often – chapters entitled ‘The last day’ that introduce a seemingly unrelated character.   Claire said those chapters were added fairly late in the writing process because she realised she needed to emphasise the ‘last day’ theme of the book. Since The Cliff House has multiple points of view, Amanda was asked whether she wrote each of these in their entirety or switched between them. Amanda explained she wrote the story chronologically.

The evening closed with an opportunity to buy books, get them signed and chat to Claire and Amanda.

Thanks to Cheryl, Events Manager at Waterstones, Reading and her helpers for another superb evening of bookish chat. You can see photographs from the evening below.

Please note, this summary is based on notes I took during the event and my own recollection. Any errors in recording views expressed during the discussion are my own.

To find events at a Waterstones near you, click here

About the Book – The Last Day

They say three’s a crowd but when Boyd moves back into the family home with his now amicably estranged wife, Vita, accompanied by his impossibly beautiful twenty-seven-year-old girlfriend, Honey, it seems the perfect solution: Boyd can get his finances back on track while he deals with his difficult, ailing mother; Honey can keep herself safe from her secret, troubled past; and Vita can carry on painting portraits of the pets she dislikes and telling herself she no longer minds her marriage is over.

But the house in Albert Terrace is small and full of memories, and living together is unsettling.  For Vita, Boyd and Honey love proves to be a surprising, dangerous thing and, one year on, their lives are changed forever.

Find The Last Day on Goodreads

About the Author – Claire Dyer

Claire Dyer’s novels The Moment and The Perfect Affair, and her short story, Falling For Gatsby, are published by Quercus. Her poetry collections, Interference Effects and Eleven Rooms are published by Two Rivers Press. She has an MA in Creative Writing from Royal Holloway, University of London and teaches creative writing for Bracknell & Wokingham College.  She also runs Fresh Eyes, an editorial and critiquing service. 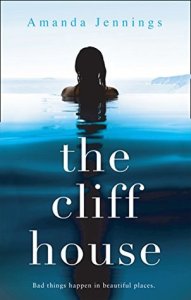 About the Book – The Cliff House

Some friendships are made to be broken.

Cornwall, summer of 1986.   The Davenports, with their fast cars and glamorous clothes, living the dream in a breathtaking house overlooking the sea.

If only… thinks sixteen-year-old Tamsyn, her binoculars trained on the perfect family in their perfect home.  If only her life was as perfect as theirs.  If only Edie Davenport would be her friend.

If only she lived at The Cliff House…

Find The Cliff House on Goodreads

About the Author – Amanda Jennings

Amanda is mother to three daughters and lives in chaotic contentment just outside Henley-on-Thames with a houseful of pets and a husband. She is the author of three books, Sworn Secret, The Judas Scar and In Her Wake. Her fourth novel, The Cliff House, another psychological thriller set in West Cornwall, was published in May 2018.

4 thoughts on “Event Review: An Evening with Claire Dyer and Amanda Jennings, 24th May ’18”