The Gruber sisters grow up in this second volume of The Biographies of Ordinary People, navigating jobs, friendships, and relationships in a constantly changing world.

The second volume follows the three Gruber sisters as they each leave their rural Midwestern hometown and try to make their way in the larger world. Meredith is determined to pursue a career in the theatre. Natalie begins sorting and filing for an insurance company.  Jackie… well, Jackie still wants to sing, and if the classical music world isn’t interested in what she can do, she’ll figure out how to do it on her own.

Set against the Great Recession, Presidents Obama and Trump, and a growing sense of national unrest, this final volume explores Meredith’s question: is it possible for ordinary people to make art? It also takes us into the close emotional connections between mothers and daughters, sisters and friends, and the people we choose to love as adults.

Find The Biographies of Ordinary People, Vol. 2 on Goodreads

The Biographies of Ordinary People, Volume 2 follows directly on from Volume 1 and covers the period from 2004 to 2016.  Even the chapter numbers continue from the first volume.  This is definitely not a sequel (the author originally envisioned it as one book but it got too large) and you would be missing an awful lot – in so many ways – if you decided to read it without having read the first volume.  You can read my review of The Biographies of Ordinary People, Volume 1 here.

In the first volume, the reader was immersed in the domestic life of the Gruber family, following the three daughters – Meredith, Natalie and Jackie – through their school and teenage years.  In the second volume, the three girls are out in the world trying to achieve their career and life ambitions – in the fields of drama, business and music – but always mindful that they are ‘Gruber kids’.   ‘The Gruber way’, instilled by their parents Jack and Rosemary, is all about the importance of education, always trying to do your best, being courteous and polite, doing your homework, doing your piano practice, getting good grades.

The Biographies of Ordinary People does exactly what it says on the tin.  It’s brings us the daily life experiences of the Gruber girls.  The sort of things that happen to most people:  moving to a new town, hunting for an apartment, managing on a small budget, making new friends, returning home for family Christmas dinners, attending friends’ weddings, meeting your brother’s new girlfriend.  It also captures the emotional side of life: the uncertainties of growing up, relationship difficulties, exploring your sexuality.   Yes, the book has an episodic structure but isn’t life just really countless small episodes?

In this second volume, world events impinge a little more – from the election of President Obama to the election of President Trump.    And, where in the first volume, the Internet was a strange new thing, in this volume we get to see the emergence of technology such as email, text, Skype, AirBnB, YouTube, reminding the reader just how long some of these things have been around.    The reader sees slightly less of Jack and Rosemary who have their own adjustments to make now their daughters have left home and they are approaching retirement.  However, there are a couple of lovely scenes between them.

As in the first volume, out of the three sisters, I found myself most drawn to Meredith.  She’s ambitious, eager to learn, to be pushed and has an idealistic view of what college education can offer.  Her dream is to pursue a career in the theatre and write and direct successful stage musicals; that is the narrative of her life she has mapped out.  She confesses in her diary: ‘I wish there was a right path I could point myself towards and know it works out in the end, as long as I keep aiming in that direction.’  However, Meredith finds that life can’t be lived as if in a book.  Visiting her childhood friend Alex, now married and with a child, she reflects: ‘Alex – Meredith looked at her, wanting to ask and not guess, but guessing instead – was living a different book.  Maybe not a book at all; maybe Alex was just living, without trying to measure herself against a narrative.’  Eventually all three girls find fulfilment in slightly different ways, not necessarily in the way they would have expected when they were younger.  But, hey, that’s life, isn’t it?

If you’re looking for a story with shipwrecks, visitors from outer space, dragons, or gruesome murders, this is not the book for you.  The Biographies of Ordinary People gives the reader an absorbing and intimate insight into the lives of its characters.  The author’s chief achievement is to make the characters seem absolutely real and credible.  You feel you could be sitting next to one of the Gruber girls on a bus or train, get chatting to them in a bookstore, come across their blog or vlog online or meet them at a conference or event.

I received an advance review copy courtesy of the author and NetGalley in return for an honest and unbiased review. 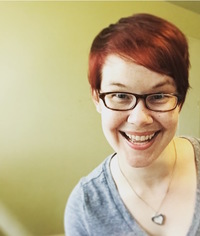 Nicole Dieker is a freelance writer, a senior editor at The Billfold, and the host of the Writing & Money podcast. Her work has appeared in Boing Boing, Popular Science, Scratch, SparkLife, The Freelancer, The Toast, and numerous other publications. The Biographies of Ordinary People is her debut novel, if you don’t count the speculative fiction epic she wrote when she was in high school. 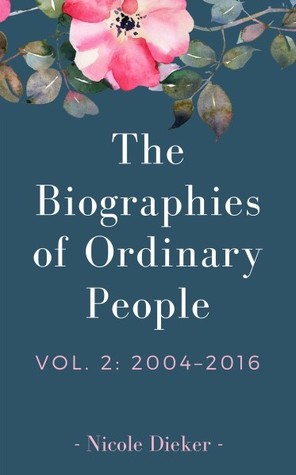 2 thoughts on “Book Review: The Biographies of Ordinary People, Vol.2 by Nicole Dieker”