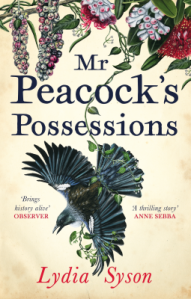 Oceania 1879. A family of settlers from New Zealand are the sole inhabitants of a remote volcanic island.

For two years they have struggled with the harsh reality of trying to make this unforgiving place a paradise they can call their own. At last, a ship appears. The six Pacific Islanders on board have travelled eight hundred miles across the ocean in search of work and new horizons. Hopes are high for all, until a vulnerable boy vanishes. In their search for the lost child, settlers and newcomers together uncover far more than they were looking for. The island’s secrets force them all to question their deepest convictions.

Joseph Peacock, the Mr Peacock of the title, is a patriarchal figure, presiding over what he views as his own ‘Garden of Eden.  His wife and family have trailed behind him from island to island, leaving behind a legacy of failed ventures and catastrophes, as he searches for land he can call his own.  ‘Plenty proved not enough for Mr Peacock.  It wasn’t his, you see.’  Arriving on the remote Monday Island (also known as Blackbird Island), not visited by passing ships from one year to the next, they find it is definitely not the Paradise they had been promised.  Cheated by those they had trusted for supplies, for a long time they lead a hand to mouth existence, at near starvation point and relying only on their survival skills and what they can forage from the island.

Ah yes, the island. At times nurturing, at other times sinister and threatening.  ‘In fact, everything here grew a sight too much for Ma’s liking.  It didn’t seem right, all this unearned fecundity.  Flowers that unfurled their perfume unbidden, petals and even leaves so brightly-coloured they seemed brazen.  Vines carelessly floating their seeds any which way and honeyed fruit that flaunted itself, then rotted, reeking, where it softly fell.’   At times, the island almost seems a living being. ‘The air itself feels violent, as though the island is gathering itself for something.  She imagines it breathing, heaving, maybe shifting.’ Furthermore, it turns out the island has hidden dangers and harbours terrible secrets.

I really liked the distinctive, almost poetic, narrative voice the author creates for Kalala, one of the six Pacific Islanders who arrive on the island to work for the Peacocks, and through whose eyes the reader witnesses some of the events.  For example, this description of their voyage to Monday Island.  ‘Esperanza pitch and roll, still in deep water plenty lengths from land, and beyond her monstrous roaring.’

I loved the way the author explored the idea of possession in all its myriad meanings. For example, it becomes clear that Joseph Peacock considers his family, and the Pacific Islanders contracted to work for him, as ‘possessions’ he owns.  However, his most prized possession is the island itself.  Greeting Kalala for the first time as he struggles ashore, Peacock says, ‘Welcome to my island.’ – note the ‘my’ there.  But the islanders too covet the tangible rewards they will receive in return for their work. ‘For have we not come here, we six, we islanders in hope of great possessions.’

Through the course of the book, the reader begins to understand just how crucial it is to Mr Peacock to possess land, not just as something to claim ownership of in the present – although that’s important – but to be able to pass on to his eldest son, Albert. ‘All this work has always been for Albert.  It’s all Pa cared about.  Not him, exactly.  But his name.  Securing the future for the Peacock family, a tiny empire nobody could ever take away because it belonged to no one, where nobody else could give orders.  Peacock land for generations.’

This desire to pass on land, as a testament to everything he has worked for and the obstacles he has overcome, is at the root of Peacock’s troubled relationship with Albert.  Because Albert doesn’t seem to share his father’s burning desire for ownership of land; in fact, Albert hates the island as he hated the voyage there.  For Peacock, Albert is a disappointment, branding him ‘weak’, ‘a shirker’, physically chastising him and viewing him as someone who constantly falls short of his expectations, particularly in comparison with his daughter, Lizzie.

It transpires that the relationship between Peacock and his daughter, Lizzie, is equally complex.   Courageous, strong and adventurous, she shares a similar temperament to her father.  ‘For Lizzie was her father’s daughter, a moth to the flame of new hopes and possibilities.’ For a long time Lizzie is blind to her father’s faults and his true nature, even though the other children see it only too clearly.  Eventually Lizzie finds herself facing an awful choice.  Because she too has ‘possessions’ – her family – she feels bound to protect.

Of course, the term ‘possessed’ may also be used to describe being taken over by strong emotions and, at times, we get glimpses of Joseph Peacock as a man possessed by a sort of  madness.  Here is a portrait of a monster, someone possessed by a desire for control, manipulative and violent.  Before the end of the book the reader will be witness to the disastrous and tragic consequences of his desire for possession and the lengths to which he will go.

Mr Peacock’s Possessions is like the strange but wonderful lovechild of Swiss Family Robinson, Lord of the Flies and The Tempest. It will appeal to readers who like their historical fiction full of atmosphere and compelling characters…and an undertone of menace.  Highly recommended.  I can see this novel making some literary prize shortlists.

I received an advance review copy courtesy of publishers, Bonnier Zaffre, and NetGalley in return for an honest and unbiased review.

Lydia Syson is a fifth-generation North Londoner who now lives south of the river with her partner and four children. After an early career as a BBC World Service Radio producer, she turned from the spoken to the written word, and developed an enduring obsession with history. Her PhD about poets, explorers and Timbuktu was followed by a biography of Britain’s first fertility guru, Doctor of Love: James Graham and His Celestial Bed, and then two YA novels for Hot Key Books set in the Spanish Civil War (A World Between Us) and World War Two (That Burning Summer). Liberty’s Fire, a passionate tale of the Paris Commune of 1871, is the third of her novels to be inspired, very loosely, by family history: Lydia’s anarchist great-great-grandmother moved in Communard circles in late nineteenth-century London.