I loved the first book in the Meonbridge Chronicles series, Fortune’s Wheel, so it’s a real pleasure to be taking part in the cover reveal for the next book in the series, A Woman’s Lot.  A Woman’s Lot is due to be published on 4th June 2018.  Do look out for my review as part of the blog tour running from 4th and 8th June.  I can’t wait to read it!

And there’s a chance to win ebook copies of Books 1 & 2 of the Meonbridge Chronicles!  Click here to enter.

Bloggers, do you like the sound of A Woman’s Lot? You can review it as part of the review tour on 4th – 8th June 2018! Just email brookbooks@hotmail.co.uk to register your interest and with details of your blog! 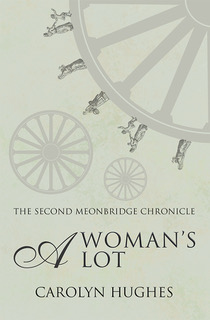 How can mere women resist the misogyny of men?

When a resentful peasant rages against a woman’s efforts to build up her flock of sheep… Or a husband, grown melancholy and ill-tempered, succumbs to idle talk that his wife’s a scold… Or a priest, fearful of women’s “unnatural” power, determines to keep them in their place…

The devastation wrought two years ago by the Black Death changed the balance of society, and gave women a chance to break free from the yoke of chatteldom, to learn a trade, build a business, be more than just men’s wives.

But many men still hold fast to the teachings of the Church, and fear the havoc the daughters of Eve might wreak if they’re allowed to usurp men’s roles, and gain control over their own lives.

Not all men resist women’s quest for change – indeed, they want change for themselves. Yet it takes only one or two misogynists to unleash the hounds of hostility and hatred… 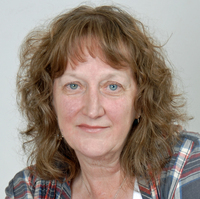 Carolyn Hughes was born in London, but has lived most of her life in Hampshire. After a first degree in Classics and English, she started her working life as a computer programmer, in those days a very new profession. It was fun for a few years, but she left to become a school careers officer in Dorset. But it was when she discovered technical authoring that she knew she had found her vocation. She spent the next few decades writing and editing all sorts of material, some fascinating, some dull, for a wide variety of clients, including an international hotel group, medical instrument manufacturers and the Government. She has written creatively for most of her adult life, but it was not until her children grew up and flew the nest, several years ago, that creative writing and, especially, writing historical fiction, took centre stage in her life. She has a Masters in Creative Writing from Portsmouth University and a PhD from the University of Southampton.

Carolyn blogs at The History Girls on the 20th of every month.

A Woman’s Lot is the second of the MEONBRIDGE CHRONICLES, her series of historical novels set in fourteenth century England. The first, Fortune’s Wheel, was published in 2016. The third in the series is well under way. 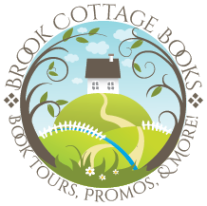