Throwback Thursday is a weekly meme created by Renee at It’s Book Talk.  It’s designed as an opportunity to share old favourites as well as books that we’ve finally got around to reading that were published over a year ago.

Today I’m revisiting a book I reviewed quite a while ago – The Dream Shelf by Jeff Russell which was published in July 2013.   You can read an excerpt from the book here and also my Q&A with Jeff Russell here.

No pictures, no past and yet his dreams were left on the shelf. A book, a toy, a framed quote and a plaster bust represented the places Sam’s father wanted to see and things he wanted to do. But Robert Archer refused to discuss his background and when he died unexpectedly Sam was left with the bitter regret of a lost opportunity to learn more about his dad.   Things change with the discovery of a hidden yearbook, a list of names and a government document. Sam’s interest in his father’s life becomes a surreptitious tale that ignites a passion to know what happened to him and why his secrets could not be shared. He embarks on a quest for ‘his story’, one with both the promise of closure and the threat of learning more than he wants to know. The trail leads to Gus, a WWII veteran, and his daughter Karen, who is torn between helping Sam and protecting her father. Together they learn the dark secret behind the dream shelf, the high cost of integrity and the lessons a father left behind for his son.

Find The Dream Shelf on Goodreads

Following the death of his father, Sam sets out to discover more about the missing years in his father’s story, the years before his marriage to Sam’s mother.  His motivation is not only to fill in the gaps in both his own ‘story’ and that of his father; it also piques his personal and professional interest in historical research.  All Sam has to go on initially is a shelf of seemingly random objects belonging to his late father that Sam believes represented his father’s dreams.

‘High on the wall above the desk, beyond the reach of a young boy’s curious hands, was a small shelf that held an odd assortment of knickknacks.  Privately Sam referred to it as the ‘dream shelf’, a repository for sacred possessions that likely came from dime-stores and garage sales… Not until childhood gave way to maturity did he realize their collective significance.  The book about Manhattan and the model trolley car represented the cities of New York and San Francisco…while the framed literary quote and the plaster bust signified the arts and science.’

Then Sam comes across two other clues – a school yearbook and a list of names – which point to a new direction and set him off on a quest to find the missing pieces of his father’s life, to find out why his father never spoke about his past or tried to fulfil his own dreams, instead investing all his time and energy in Sam’s future.   In fact, he starts to wonder if he really ever truly knew his father. ‘He gave me everything, and when I look back on my life I see him.  But when I look back on his life…it isn’t there.’

Sam’s very analytical, methodical approach to following up the clues is described in detail.   Eventually he tracks down one of the people on his father’s list – Gus – but finds him similarly reticent about providing information about his wartime experience.  Any answers he does give are seemingly riddles.    In the process of his investigation, Sam finds himself drawn to Gus’s daughter, Karen, although she is torn between wanting to help Sam, find answers herself and protect her father’s fragile self.  Eventually the mystery is unravelled but not before Sam (and Karen) have to face some uncomfortable truths – clearly the moral is be careful what you wish for.   Also, Sam realises the actual meaning of the objects on the ‘dream shelf’ may be entirely different to that he had imagined.

The book explores some interesting moral questions such as whether it is ever right to do the wrong thing, such as disobey an order if it conflicts with a matter of personal principle.  It also focuses on the impact the decision of a single person can have on the outcome of wider events.  The author uses both the story of Sam’s father and that of a fictional soldier of the American Civil War (whose story is Sam is also researching) to explore these ideas.

Clearly the author is fascinated by the way people think and their decision making processes.   I liked the developing relationship between Karen and Sam but, again, some of the dialogue felt rather stilted – more like therapy sessions than normal conversations you would have on a dinner date or riverside walk.   But perhaps I’m wrong and those are the kinds of conversations that a historian and a counsellor do have in real life!  I found the events towards the end of the book very moving but its theme of coming to terms with the past and moving on injected a welcome note of hope for the future at the end of the book.

I’d like to thank the author for my review copy which was provided in return for an honest review.

Jeff: I am a tale-spinner. My childhood heroes were Jules Verne and Victor Appleton II, architects of fantastic adventures. Hemingway stepped in when I discovered that the trials and triumphs of real people – those with limited physical and financial resources – were even more intriguing than science fiction. Today I try to follow that example with my own characters. They are the ‘you and me’ of the world, ordinary people facing extraordinary circumstances, beaten down perhaps and yet determined to succeed. Invariably they find adventure, romance and self-fulfilment, as should we all.  When not absorbed in the pages of some new author or hammering away at my latest manuscript I can be found living and running in Stowe, VT. 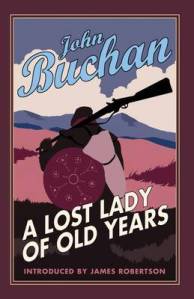 Set in Scotland in 1745, during the Jacobite Rebellion, this dark story of loyalty and betrayal on the road to Culloden Moor recounts the adventures of Francis Birkenshaw.

The Jacobite cause means nothing to him until a chance meeting with the beautiful Margaret Murray presents an opportunity for profit and adventure.

The fateful encounter marks the beginning of Francis’s involvement with John Murray of Broughton, an infamous traitor and turncoat.

Find A Lost Lady of Old Years on Goodreads

A Lost Lady of Old Years is the fifth book in my Buchan of the Month reading project.  You can find out more about the project plus my reading list for 2018 here.  It is one of the few books by John Buchan I’ve not read before.  I’m going to preface this review by stating that, in my opinion, A Lost Lady of Old Years is not the best book John Buchan ever wrote although, to be fair, it was published early in his writing career.  You can read a spoiler-free introduction to the book here.

Buchan paints a picture of a young man, Francis Birkenshaw, the son of a good family, who nevertheless finds himself unsure of his place in the world.  He falls prey to the lure of alcohol, women and the odd spot of fisticuffs in the local taverns.  His desire for adventure brings him close to the borders of criminality resulting in him having to make a speedy escape from his hometown, leaving behind the staid career that had been mapped out for him.

He decides to travel to France but events intervene, notably his meeting with the beautiful and virtuous Margaret Murray, wife of John Murray of Broughton, an influential supported of ‘Bonnie’ Prince Charlie.  Entrusted with an important task by Mrs Murray, he has a kind of epiphany inspired by her honour and virtue and begins to seek a different path in life.  Carrying out the task he has been entrusted with and what follows bring him in close proximity to influential people and dramatic events in Scottish history, such as the Battle of Culloden.

In the book’s dialogue, Buchan seeks to reproduce the Scottish mode of speech, including  local dialect words (‘kenspeckle’, ‘camsteery’ or ‘clanjamphray’ anyone?) with a bit of Gaelic thrown in for good measure.  This takes some getting used to and might prove problematic for some readers.  I think it would also help to have some prior knowledge of the history of that period, particularly the Jacobite Rebellion.  Mine was only sketchy so I did have to do some research after reading the book to check how close the story sticks to historical fact.  (As far as the main characters go – John Murray of Broughton, Lord Lovat, etc – the answer is pretty close, although Francis Birkenshaw is an entirely fictional character.)

In A Lost Lady of Old Years, Buchan explores themes that he would revisit in later books such as The Half-Hearted (next month’s Buchan of the Month), Mr. Standfast and Sick Heart River.  These themes of self-sacrifice, duty and courage we can perhaps trace back to his upbringing and the text that was so influential throughout his life, John Bunyan’s The Pilgrim’s Progress.  At the end of the book, both Francis and Margaret face a difficult moral choice between following their hearts or their consciences.  Choice made, Margaret reflects, ‘After the colours the sober grey, for you as well as me, Francis.’  Buchan would later revisit this period of history in his novel, Midwinter.

Try something similar…Midwinter by John Buchan