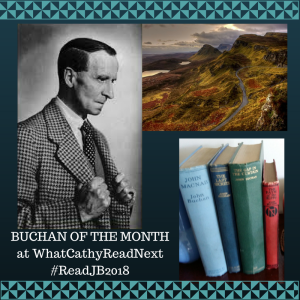 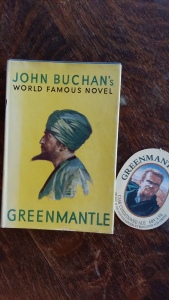 In Greenmantle (1916) Richard Hannay, hero of The Thirty-Nine Steps, travels across war-torn Europe in search of a German plot and an Islamic Messiah. He is joined by three more of Buchan’s heroes: Peter Pienaar, the old Boer Scout; John S. Blenkiron, the American determined to fight the Kaiser; and Sandy Arbuthnot, Greenmantle himself.

The intrepid four move in disguise through Germany to Constantinople and the Russian border to face their enemies: the grotesque Stumm and the evil beauty of Hilda von Einem.

Note: I read my personal copy of Greenmantle published by Hodder & Stoughton in 1950 but the details and links below are for an ebook  public domain edition available free on Amazon.  Other paperback editions are widely available.

Greenmantle is the fourth book in my Buchan of the Month reading project.  For a spoiler-free introduction to Greenmantle, including details of its first publication and context, click here.  To find out more about the project and my reading list for 2018, click here.

Recovering from injuries sustained at the Battle of Loos, Richard Hannay is charged by Sir Walter Bullivant with investigating rumours of an uprising in the Muslim world.  It seems the Germans plan to use religion to help them win the war by causing Britain and its allies to divert troops from the Western Front. Hannay reluctantly accepts the case seeing it as a diversion from his true role leading his troops on the front line.

The action of the book moves from wartime Germany to Asia Minor as Hannay and his comrades seek to disrupt the plot.  This involves a perilous journey through enemy territory to meet up with his friend, Sandy Arbuthnot, in Constantinople.  Hannay and his other companions Peter Pienaar and John S. Blenkiron, have to outwit some formidable foes, including the thuggish Ulric von Stumm, Turkish army officer Rasta Bey and the charismatic but malevolent, Hilda von Einem.

It’s all terrific fun involving coded messages, a dying prophet, disguises and a secret band known as The Companions of the Rosy Hours as Hannay seeks to foil the dastardly plot.  However, there are also elements of real life events.  For example, the character of Sandy Arbuthnot is based on Buchan’s friend Aubrey Herbert – with a touch of Lawrence of Arabia thrown in.  It all comes to a climax in a vividly described battle scene, again inspired by actual events in the First World War.

Next month’s Buchan of the Month is A Lost Lady of Old Years, first published in 1899. 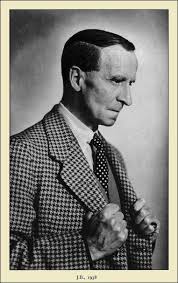 You can find out more about John Buchan, his life and vast literary output by visiting The John Buchan Society website.