In The Cage Where Your Saviours Hide by Malcolm McKay has been described as ‘a remarkable novel of crime and corruption…set in a brooding, rain-swept Scottish city burdened by a history that is compellingly different from the one we think we know.’

Intrigued?  Good because I have an extract from the book for you below. 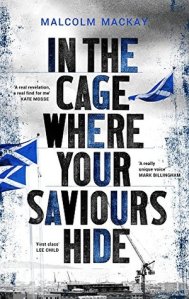 The independent kingdom of Scotland flourished until the beginning of the last century. Its great trading port of Challaid, in the north west of the country, sent ships around the world and its merchants and bankers grew rich on their empire in Central America.

But Scotland is not what it was, and the docks of Challaid are almost silent. The huge infrastructure projects collapsed, like the dangerous railway tunnels under the city. And above ground the networks of power and corruption are all that survive of Challaid’s glorious past.

Darian Ross is a young private investigator whose father, an ex cop, is in prison for murder. He takes on a case brought to him by a charismatic woman, Maeve Campbell. Her partner has been stabbed; the police are not very curious about the death of a man who laundered money for the city’s criminals. Ross is drawn by his innate sense of justice and his fascination with Campbell into a world in which no-one can be trusted.

‘Fascinating speculative fiction.’ The Bookseller
‘Mackay’s writing is clean and spare, with flashes of dark humour.’ The Herald
‘A real revelation, a real find for me.’ Kate Mosse
‘A really unique voice.’ Mark Billingham

Find In The Cage Where Your Saviours Hide on Goodreads

Darian Ross might have been the only person who enjoyed the commute to work in Challaid, or at least admitted it. A short walk down to the crowded Bank Station, making his way through the bustle of bleary-eyed miserablists at half-eight. Onto the train and east through the tunnel, off at the next stop, which was Glendan Station. That was the closest stop to the tunnel where all those people were killed digging it, so they claimed they would name the station in honour of those lost. Their choice? The title of the company the dead men worked for, that had sent them to excavate in treacherous conditions with no thought for their safety. Apparently the people of influence who picked the name couldn’t understand why none of the families accepted their invitations to the opening. Anyway, that was also the closest stop to Darian’s work, and it was a twelve-minute walk through the morning to Cage Street. On a nice day, admittedly rare, the stroll through busy streets could be pleasant.

Here we’ll talk a little about what Darian did for a living. He was, in truth, a sort of private detective, but if you asked him about his job those would be the last two words that would fight their way through his lips. He worked for a man called Sholto Douglas, a former detective now running Douglas Independent Research. How Sholto had managed to last fifteen years as a detective was one of the great many mysteries he never solved, and he was relieved to get out of it. Now he was in a single-room office on the second floor of a building in need of repair on a narrow old street in the city centre, pretending his company limited itself to market research and credit checks.

When he started Darian asked Sholto about the fact he was a private detective dressed up as something else and nearly provoked an aneurysm. Sholto growled and said, ‘It is research, really, when you think about it. That’s what all of police work is, or detective work, or whatever you want to call it.’

Then the conversation would switch to who was to blame, and while Scotland hadn’t had a proper war with England since the Trade Wars of the eighteenth century, Sholto was all for kicking off another.

‘And the licences, and the restrictions, they’re all nonsense anyway, just there to stop you doing the work. They only did it because the English put the same stuff into law so they thought they had to copy it. Just copying another country because they couldn’t think of anything better to do with their time, that’s all it was. Bloody English. Bloody Scottish government. You look at the two laws; they’re almost identical except ours are harsher. Also, it’s Raven’s fault… Don’t get me started on Raven…’

Raven Investigators was a large firm of private detectives based in Edinburgh and with offices in our own fair city who were raking up more muck than a landscape gardener. Their respect for the law was considered inadequate, so the law was tightened hard and Raven Investigators shrank accordingly. Companies like Douglas Independent Research existed so that people who couldn’t afford the shiny corporate professionalism of Raven had someone to pester small-scale criminals for them, or that’s how Sholto liked to present it, anyway. So that was the not exactly noble world of half-truths and delusions that Darian walked into each morning, including this Saturday. 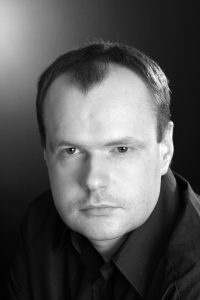 Malcolm Mackay was born in Stornoway on Scotland’s Isle of Lewis. His Glasgow Trilogy has been nominated and shortlisted for several international prizes, including the Edgar Awards’ Best Paperback Original and the CWA John Creasey (New Blood) Dagger award. His second novel, How a Gunman Says Goodbye, won the Deanston Scottish Crime Book of the Year Award. Mackay still lives in Stornoway.