As a bookblogger, it’s frustrating not to be able to accept every review request that comes your way.  After all, there are only so many hours in the day.  However, just because my own review pile is verging on the mountainous, it doesn’t mean I should hide away what might be your next perfect read.

Today I’m delighted to welcome to What Cathy Read Next, siblings Robert Peacock and Sara Cook, authors of The Jinn and the Sword.   The book is described – enticingly – as ‘a tale of mystery, suspense and romance in the sixteenth century court of Suleyman the Magnificent’.  And just look at that gorgeous cover!

I’m pleased to say the authors have selected a few of their favourite quotations from the book to whet your appetite and, in a fascinating guest post, Sara shares her very personal writing journey. 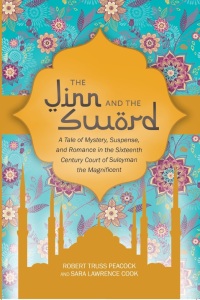 Set in the 16th century imperial Ottoman court of Suleyman the Magnificent, this novel of mystery, suspense and romance introduces the Venetian Conte Vincenzo Lupo (Il Lupo, the Wolf), renowned for his swordsmanship and investigative skills.

Fearing Topkapi Palace officials may be complicit in assassination attempts and palace intrigues, Il Lupo travels to Istanbul at Suleyman’s behest. His equally skilled daughter, Francesca, whom he has raised as a single father, accompanies him disguised as a boy. Escorted by Kemal, commander of the elite palace guard, and Aziz, a formidable Harem eunuch, they quash assassination attempts against Suleyman and his favored concubine, Roxelana.

Multiple mysteries requiring resolution include the theft, masterminded by the ghoulish Shaitan, of the sacred relics of Muhammed from the palace repository and murders committed by a demonic jinn, dwelling in labyrinthine passageways beneath the palace. Although filled with action, suspense and mystery, at its heart, the novel is a tale of love, awakenings, yearnings and beneficence that will touch the human spirit.

Find The Jinn and the Sword on Goodreads

A Taste of The Jinn and the Sword

‘The cruelties man inflicts upon fellow man are endless and barbaric…These things are beyond comprehension and each brutal bestial act creates an individual human tragedy, the consequences spilling into many lives.”

“This is the man known for solving mysteries of the imperial courts. He is very clever and often impassive.  Be cautious.  Vincenzo Lupo is more a fox than a wolf.”

‘A terrified Mehmed gazed into the distorted and grotesque face of the Shaitan, its wildly flashing eyes exuding a phlegethon of malice and drooling mouth filled with sharp, cuspidated teeth.’

‘A journey within itself, Istanbul always revealed new discoveries with each visit. To cross from one side of the street to another was to walk through the centuries.’

‘Il Lupo cautioned, “Apparent demeanour is an insufficient reason to rule anyone out at this time. Remember, we cannot discard clues until we are completely certain they are of no value. We must always open-mindedly interrogate our assumptions.”’

‘Tears still softly falling from her eyes, she slowly began to move her hips in a seductive, circling motion with arms raised over her head, her gauzy fabric draped from her fingertips as she pulled it over her face, exposing only her moist eyes. Moving with exquisite grace around the room, her motions intensified, matching the pace of the music. Roxelana’s dance was rapturous.’

“Make no mistake, Kemal.  Yes, I am a woman, but never underestimate me.  I am a match for any man.”

Guest Post ‘Vision and Inspiration: The Jinn and the Sword’ by Sara Cook

How do vision and inspiration emerge for a novel…a tale such as ours?

In our case, our novel came to fruition in a collaboration that evolved over many years.  My brother and co-author, Rob, handed me a 20,000 word outline complete with a mesmerizing setting and ingenious plot, and framed with a beautifully written poetic Prologue and Epilogue. He provided that vision a decade ago, but the vicissitudes of both our lives intervened. I required inspiration to write which, I would discover, could only be found in the quiet…a listening to the stillness and I was certainly not there ten years ago.

Now, as I sit here in the great Northern Plains of the massive North American continent, the quiet is profound.  After years of “sensory city cacophony” (a perfectly coined phrase from Rob), coming here made me aware that my hectic pace was robbing me of the life I thought I was living. In the doing – this change of lifestyle – I was finally able to accept my brother’s long ago invitation to take on the vision for his story.

I did not know it then – that this is where I needed to be; humbled and quieted, receptive to my own thoughts and instincts – away from the jarring and vexing chaos.  The quiescence was the balm to my battered soul, presenting me with gifts…realization of my own significance and insignificance…how small I am in the world and yet the power that lies within, and even hearing, for the first time in my life, how the “earth sounds” in all this exquisite and swaddling quiet. I understood why the Native Americans named even, the wind.

There is a special kind of magic in all this serenity and I was inspired to do something I never imagined I would do.  Write…co-author…a book as I plunged into the ambiguous, “uncharted labyrinth” of my mind, sending him my first draft of 98,000 words. The wordsmith had the audacity to cut it to 82,000 words! My revenge was to send it to him again, and this time with 118,000 words.  (The seesaw of increasing and decreasing words continued seemingly, ad infinitum – or at least five manuscripts.)

Once the decision was made, the question became, what do I do to make the book unforgettable? Ha! May as well try to catch a falling star! How could I build on his intriguing plot?  He was staccato and I was legato. There were intense searches for perfect words…quidnunc, coxcomb, fallalery, froideur, effluvium, caliginous (how many ways can one describe darkness?), pulchritudinous, esperance…lovely, irresistible, necessary words.  Finding compromise was at times difficult and of course, there were the predictable sibling spats. We were often focused on how to make our cross-genre novel relevant to all manner of reader – attempting to appeal to those who would enjoy its suspense and mystery, while still appealing to those who might relish romantic moments with words intended to be repeated and whispered under their breath.

I suppose these are questions common to many writers. However I am unsure since I still do not consider myself a “writer.”  Perhaps, I could describe myself as an “expresser”, if such a word exists. Steeling myself, I gathered up all those “pearls” that reside in each of us – those which we are cautioned should not be cast before the undeserving – trusting and bequeathing them out into the world of readers in the thoughts and actions of our characters, praying they be found worthy.

Once I started, I could not stop, loving to add visual richness to the scenes and creating emotional identities for the characters, imagining where they wanted to go. I will confess that my fantasy inspiration for Vincenzo Lupo – our protagonist – was that British jewel – Rufus Sewell – #sigh.  I surprised, even myself, with the writing of the opening scene…the book starts off with a bang…all gruesome….with a murderous Jinn lurking beneath the Topkapi Palace and Istanbul. I was more versatile at portraying violence, murder and mayhem than I thought – rather scary, actually.  And Rob, all pristine and power, was able to write with enormous sensitivity.

“And thus, in this moment, Francesca Lupo acquiesced, submitting herself to the utterly irresistible metamorphosis of the girl into the woman, a transformation tenderly and profoundly touching her embryonic soul.”

There were endless hours of research required to ensure the accuracy of the timeline and geopolitics of the era, required for the verisimilar nature of the tale as well as planning, in advance, timelines necessary for possible sequels (#tease).

A final note…the book was originally intended to be illustrated in a manner evocative of the times and the tale…illuminated in rich and breathtaking colour, but the cost to our readers would have been prohibitive.  To see our original intent, images are available on Instagram.  We hope you love our story.

Robert Truss Peacock is an attorney/CPA who has served as an Administrative Judge for the past thirty-two years, most recently on the Armed Services Board of Contract Appeals (ASBCA) and previously on the Corps of Engineers Board of Contract Appeals prior to its merger with the ASBCA in 2000. His inspiration for the book emanated from his study of Ottoman history and culture and visits to the magnificent city of Istanbul when he was stationed in Turkey as an Air Force JAG officer approximately forty years ago. Whenever able, he spends his free time with his twin daughters, Mary and Anne, and his grandchildren, Wilfred and Amelia. 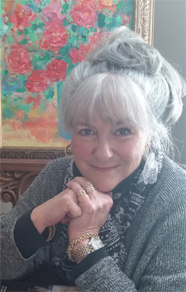 Sara Lawrence (Peacock) Cook is a published interior designer and retired from her thirty year career as owner of an interior design business and importer of antiques. Living in Europe for fifteen years she travelled extensively for clients, business and pleasure, including a visit to Istanbul, Turkey – the setting for the novel. A self-described “collector of experiences and impressions,” she turned her creative efforts to writing, using her vivid recollections to build scenes and characters in The Jinn and the Sword, an intriguing, inspired plot and mesmerizing outline developed by her brother and co-author, Robert.

Joining forces, their shared vision was to enhance the reader’s experience by illustrating the book in a manner evocative of the manuscripts of the 16th century. Leaving behind the hectic pace of suburban life, she recently relocated to the northern Great Plains in search of a more Arcadian lifestyle. She has been married forty-five years to John L. Cook, a retired Army Lieutenant Colonel and published author. She credits Katelyn Cook and Rebecca Cook, daughters made family through marriage to their sons, Zachary and Joshua, for their elevated artistic and editorial contributions.