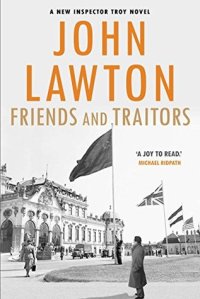 After a concert in Vienna he is approached by an old friend whom he has not seen for years – Guy Burgess, a spy for the Soviets, who says something extraordinary: ‘I want to come home.’ Troy dumps the problem on MI5 who send an agent to de-brief Burgess – but the man is gunned down only yards from the embassy, and after that, the whole plan unravels with alarming speed and Troy finds himself a suspect.

As he fights to prove his innocence, Troy finds that Burgess is not the only ghost who returns to haunt him.

Find Friends and Traitors on Goodreads

I seem to be making a habit recently of coming in at an advanced stage of a series. As a case in point, Friends and Traitors is book eight in John Lawton’s Inspector Troy series.  (However, it’s not quite as bad as a book I’m shortly to read – Prussian Blue by the late lamented Philip Kerr – which is number twelve in his Bernie Gunther series.)

As a sign of how far we are into the series, Inspector Troy is now a Chief Superintendent in charge of the Murder Squad.   However, the author is kind to readers like myself who haven’t read previous books in the series, because the first part of Friends and Traitors takes us back to when Troy was a young man and to his first meeting with Guy Burgess at a family dinner party.  Over the next few years, Troy has a number of memorable encounters with Burgess, one of which will prove to be crucial to events later in the book.

The Guy Burgess of Friends and Traitors is the louche, sexually promiscuous, heavy drinking risk-taker that I remember from Alan Bennett’s television play, An Englishman Abroad (with the inimitable Alan Bates playing Burgess).  However, he’s also terrifically entertaining. ‘It occurred to Troy that Burgess was the kind of bloke who’d never leave a party until physically thrown out.’ The author gives Burgess some great lines: ‘Two things an Englishman should never go abroad without – Jane Austen and a badger-hair shaving brush.’   There is also a brilliant section after Burgess’ defection where he lists at length all the things he misses about England, including ‘the bloke in the pub in Holborn who could fart the national anthem’, Mantovani, his flannelette stripy pyjamas and ‘jellied eels and a bit of rough’. (There’s a lot more.)

Talking of risk takers, Troy is a bit of one himself.  Clever, well-read and resourceful, he nevertheless gets himself into some scrapes, many of them involving women.  And every so often in Friends and Traitors, the author drops in a nugget of sometimes quite surprising information about Troy’s past.     Troy’s family contain some characters as well, especially his sisters who also have a chequered history when it comes to relationships (with men and booze).

The book did feel a little fragmented at times as if a number of different stories had been melded together.  For instance, there is section in which Troy joins members of his family on a ‘Grand Tour’ of European capitals whose main purpose seems to be to place Troy in Vienna at a pivotal moment.  And the murder of the agent mentioned in the book description and Troy’s subsequent investigation of it doesn’t happen until around half way through the book.

However, I really enjoyed Friends and Traitors and the fragments of information about Troy’s previous exploits have made me keen to read earlier books in the series.  Who knows, I might even break with habit and start from the beginning!  As a fan of espionage stories, including John le Carré, I found the sections of the book about Guy Burgess really fascinating.   I recommend reading the author’s Afterword which includes details of his research and key sources.

I received an advance reader copy courtesy of NetGalley and publishers Grove Press in return for an honest and unbiased review. 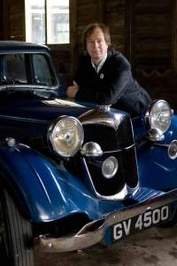 John Lawton is a producer/director in television who has spent much of his time interpreting the USA to the English, and occasionally vice versa. He has worked with Gore Vidal, Neil Simon, Scott Turow, Noam Chomsky, Fay Weldon, Harold Pinter and Kathy Acker. He thinks he may well be the only TV director ever to be named in a Parliamentary Bill in the British House of Lords as an offender against taste and balance. He has also been denounced from the pulpit in Mississippi as a `Communist,’ but thinks that less remarkable.

He spent most of the 90s in New York – among other things attending the writers’ sessions at The Actors’ Studio under Norman Mailer – and has visited or worked in more than half the 50 states. Since 2000 he has lived in the high, wet hills of Derbyshire England, with frequent excursions into the high, dry hills of Arizona and Italy.

He is the author of 1963, a social and political history of the Kennedy-Macmillan years, eight thrillers in the Troy series and a stand-alone novel, Sweet Sunday.  In 1995 the first Troy novel, Black Out, won the WH Smith Fresh Talent Award. In 2006 Columbia Pictures bought the fourth Troy novel Riptide. In 2007 A Little White Death was a New York Times notable.

In 2008 he was one of only half a dozen living English writers to be named in the London Daily Telegraph‘s `50 Crime Writers to Read before You Die.’ He has also edited the poetry of DH Lawrence and the stories of Joseph Conrad. He is devoted to the work of Franz Schubert, Cormac McCarthy, Art Tatum and Barbara Gowdy.