Richard feels trapped in his hectic life of commitment and responsibility. From the daily mayhem of having young children, an exhausted wife and pushy in-laws who frequently outstay their welcome, Richard’s existence fills him with panic and resentment. The only place he can escape the dark cloud descending upon him is the bathroom, where he hides for hours on end, door locked, wondering how on earth he can escape.

Often staring out of his window, Richard enviously observes the tranquil life of Bill, his neighbour living in the bungalow across the road. From the outside, Bills world appears filled with comfort and peace. Yet underneath the apparent domestic bliss of both lives are lies, secrets, imperfections, sadness and suffering far greater than either could have imagined. Beneath the surface, a family tragedy has left Bill frozen in time and unable to move on.  As he waits for a daughter who may never return, Bill watches Richard’s bustling family life and yearns for the joy it brings. As the two men watch each other from afar, it soon becomes apparent that other people’s lives are not always what they seem.

Richard seems to have everything – a good job, two lovely children, a nice house – but it isn’t making him happy.  Richard feels trapped in a life that hasn’t turned out how he imagined, ‘trapped inside something I created.’  The heavy snowfall currently preventing his usual escape to work only increases this sense of entrapment.  Seeking refuge in the kitchen, he finds parallels between the mundane activity of drying the dishes and his life: ‘I pick up another plate and begin to dry it slowly and carefully…Around and around in a circular motion, like the stylus on a record, in ever-decreasing circles… My mind drifts and I realise I share so much in common with the tea towel and the plate.  An endless journey with no beginning and no end.’

Richard is actually a caring father but he doesn’t see that.  Instead he is overly self-critical, perceiving only his failings, thinking even that his family would be better off without him. There are small signs of Richard’s growing desperation such as his reference to the front door as ‘the door to freedom’.   The idea of escape and ‘starting over’ begins to dominate his thoughts and planning it provides him with a way to cope.  He’s very practical and methodical about his plans but the reader does wonder if he would actually ever go through with it or if just the mere existence of the plan acts as a coping mechanism for him.

The routine of domestic life in Richard’s household – meal times, bath time, bed time, watching TV – is chronicled in minute detail; so much so that I began to have a lot of sympathy with Richard’s desire to break free from it all.  I too found myself harbouring thoughts of escape when reading about mundane problems such as clearing snow from the drive and de-icing the car.

There were characters in the book I found it easy to empathise with – Richard, Richard’s father-in-law Kenneth, Bill and Rosie the neighbours across the road – and characters I frankly found irritating (Lisa and Dina, I’m looking at you.)  Richard and his wife, Lisa, have a curiously distant relationship and I struggled to find much attractive about Lisa, what with her snoring and rather slobbish habits.  However, I have to admit that the scenes of Dina, Lisa’s mother, and Lisa watching the TV together were amusing.  I’m sure we all have experience of a relative who insists on talking or asking questions throughout a programme (“Is that so and so from such and such?”) so you have to restrain yourself from shouting, ‘If you’d just shut up, you’d know what was going on!”.

As events unfold over the space of just a few days, it transpires that the ‘quiet peacefulness’ and ‘utopia’ that Richard believes exists in the bungalow across the road is anything but.  The irritations of Richard’s daily existence pale into insignificance compared with the tragedy that Bill and Rosie have experienced in their lives. In fact, the reader learns, Richard possesses everything that they have lost.

Drift Stumble Fall is a convincing portrait of a man struggling with the responsibilities of daily life, something I’m sure most of us can identify with from time to time unless we have been incredibly lucky.   However, I found the story of Bill and Rosie the most compelling element of the book – a heartbreaking, moving and thought-provoking reminder that the grass may not be greener (in fact, it probably isn’t) on the other side of the fence.

I received an advance reader copy courtesy of publishers Hideaway Fall in return for an honest and unbiased review.  If you’re a book blogger or reviewer and would like to be part of #teamhideaway you can sign up here. 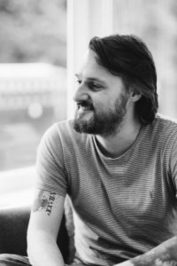 M Jonathan Lee is a nationally shortlisted author who was born Yorkshire where he still lives today with his wife, children and dog, Alfie.  His debut novel, The Radio, was shortlisted for The Novel Prize 2012. He has spoken in schools, colleges, prisons and universities about creative writing and storytelling and appeared at various literary festivals including Sheffield’s Off the Shelf and Doncaster’s Turn the Page festival.  His second novel, The Page, was released in February 2015.

His much anticipated third novel, A Tiny Feeling of Fear, was released in September 2015 and tells the story of a character struggling with mental illness. All profits from this novel are donated to charity to raise awareness of mental health issues. This was accompanied by the short film, Hidden which was directed by Simon Gamble.

In 2016, he signed for boutique publishers, Hideaway Fall and his fourth novel Broken Branches was released in July 2017, winning book of the month in Candis magazine for September.  He is a tireless campaigner for mental health awareness and writes his own column regularly for the Huffington Post. He has recently written for the Big Issue and spoken at length about his own personal struggle on the BBC and Radio Talk Europe.

His fifth book, the critically acclaimed Drift Stumble Fall is released in Spring 2018.