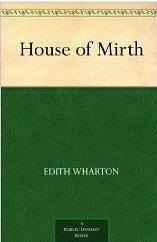 Lily Bart, beautiful, witty and sophisticated, is accepted by ‘old money’ and courted by the growing tribe of nouveaux riches. But as she nears thirty, her foothold becomes precarious; a poor girl with expensive tastes, she needs a husband to preserve her social standing and to maintain her in the luxury she has come to expect.

Whilst many have sought her, something – fastidiousness or integrity- prevents her from making a ‘suitable’ match.

Find The House of Mirth on Goodreads

Knowing Edith Wharton’s reputation as a writer but not having read any of her books, I was anticipating wit and dry humour.  What I wasn’t quite expecting was the deft way in which the author wields the literary equivalent of a scalpel to dissect the snobbery, hypocrisy and downright cruelty of the New York social scene. I mentioned the mocking humour and here are a few of my favourite examples:

On the eligible but tedious bachelor, Percy Gryce: ‘Mr. Gryce was like a merchant whose warehouses are crammed with an unmarketable commodity.’

On Lily’s aunt, Mrs Peniston: ‘To attempt to bring her into active relation with life was like tugging at a piece of furniture which has been screwed to the floor.’

‘It was the “simple country wedding” to which guests are conveyed in special trains, and from which the hordes of the uninvited have to be fended off by the intervention of the police.’

‘Lily presently saw Mrs. Bry cleaving her determined way through the doors, and, in the broad wake she left, the light figure of Mrs. Fisher bobbing after her like a row-boat at the stern of a tug.’

And I have to mention the elegance of the writing that can convey so much in just a few sentences. For example, as Lily observes those she has regarded as friends: ‘That very afternoon they had seemed full of brilliant qualities; now she saw that they were merely dull in a loud way.  Under the glitter of their opportunities she saw the poverty of their achievement.’

Throughout the book, my sympathy was always with Lily and the situation she finds herself in.  Yes, she has a role which is largely confined to being an ‘adornment’ to the social scene.  However, I admired her determination to use the gifts she has been given, even if that does involve a degree of manipulation.  Unfortunately, an entirely innocent action and a chance meeting set in motion a chain of events that put Lily in the power of others, risking her future happiness.  Lily believes her beauty allows her to manipulate men but, sadly, she finds it is she who is being manipulated because of a mistake and the need to maintain her social status because of her (relative) poverty.

It transpires that navigating the social scene is akin to a game of snakes and ladders. Working your way up takes time, requires skill in order to cultivate contacts and involves being seen in the right places with the right people.  ‘She had been fashioned to adorn and delight; to what other end does nature round the rose-leaf and paint the humming-bird’s breast?  And was it her fault that the purely decorative mission is less easily and harmoniously fulfilled among social beings than in the world of nature?’  However, one misstep, one troublesome rumour or item of mischievous gossip and you can slide down very quickly.   ‘Lily had the doomed sense of the castaway who has signalled in vain to fleeing sails.’

Very few of the characters in the book come out well.  So-called friends (I’m looking at you, Mrs. Fisher) prove to be anything but in Lily’s hour of need – because they are too timid, too afraid of what others will say or possess ulterior motives.

I’ll confess, I was unprepared for the impact the ending had on me.  Part of me could understand why Lily did what she did and part of me wished she had found the strength to take another course.  The romantic in me wanted another outcome altogether which, I’ll admit, would not have been true to the spirit of what the author was trying to communicate in the book.   Call me an old softy.

This will definitely not be the last book by Edith Wharton I read.  What an amazing author to have discovered; even more amazing when you realise The House of Mirth was Wharton’s first published novel.

The House of Mirth is a book from my Classics Club List and also forms part of my list for the 2018 TBR Pile Challenge hosted by RoofBeamReader.

Try something similar…The Death of the Heart by Elizabeth Bowen

Edith Newbold Jones was born into such wealth and privilege that her family inspired the phrase “keeping up with the Joneses.” The youngest of three children, Edith spent her early years touring Europe with her parents and, upon the family’s return to the United States, enjoyed a privileged childhood in New York and Newport, Rhode Island. Edith’s creativity and talent soon became obvious: By the age of eighteen she had written a novella, (as well as witty reviews of it) and published poetry in the Atlantic Monthly.

After a failed engagement, Edith married a wealthy sportsman, Edward Wharton. Despite similar backgrounds and a shared taste for travel, the marriage was not a success. Many of Wharton’s novels chronicle unhappy marriages, in which the demands of love and vocation often conflict with the expectations of society. Wharton’s first major novel, The House of Mirth, published in 1905, enjoyed considerable literary success. Ethan Frome appeared six years later, solidifying Wharton’s reputation as an important novelist. Often in the company of her close friend, Henry James, Wharton mingled with some of the most famous writers and artists of the day, including F. Scott Fitzgerald, André Gide, Sinclair Lewis, Jean Cocteau, and Jack London.

In 1913 Edith divorced Edward. She lived mostly in France for the remainder of her life. When World War I broke out, she organized hostels for refugees, worked as a fund-raiser, and wrote for American publications from battlefield frontlines. She was awarded the French Legion of Honor for her courage and distinguished work.

The Age of Innocence, a novel about New York in the 1870s, earned Wharton the Pulitzer Prize for fiction in 1921 – the first time the award had been bestowed upon a woman. Wharton travelled throughout Europe to encourage young authors. She also continued to write, lying in her bed every morning, as she had always done, dropping each newly penned page on the floor to be collected and arranged when she was finished. Wharton suffered a stroke and died on August 11, 1937. She is buried in the American Cemetery in Versailles, France.

4 thoughts on “Book Review: The House of Mirth by Edith Wharton”