A lay community of thoroughly mixed-up people is encamped outside Imber Abbey, home of an order of sequestered nuns. A new bell is being installed when suddenly the old bell, a legendary symbol of religion and magic, is rediscovered. And then things begin to change. Meanwhile the wise old Abbess watches and prays and exercises discreet authority. And everyone, or almost everyone, hopes to be saved, whatever that may mean. Originally published in 1958, this funny, sad, and moving novel is about religion, sex, and the fight between good and evil.

Find The Bell on Goodreads

“Our actions are like ships which we may watch set out to sea, and not know when or with what cargo they will return to port.” In many ways, The Bell is a book about actions and unintended consequences.

Imber Court is described as ‘a buffer state between the Abbey and the world’ and it does seem that many of its occupants are in transition.   The most obvious is Catherine, who is spending her last few weeks before entering the Abbey as a nun.  However, as the Abbess sagely observes, “Those who hope, by retiring from the world, to earn a holiday from human frailty, in themselves and others, are usually disappointed.”

Dora is dissatisfied with and feels trapped in her marriage to Paul, but can see no alternative.  ‘That was marriage, thought Dora, to be enclosed in the aims of another.’  Having broken free once, she now feels compelled to return to Paul and Imber Court is the scene of their reunion.  I have to confess I found Dora irritatingly passive about her situation for a lot of the book.  I tended to sympathise with her friend’s advice that ‘You must either knuckle under completely or else fight him.’ My view did change once she and one of the young visitors to Imber Court, Toby, embark on an enterprise together.  ‘It was as if, for her, this was to be magical act of shattering significance, a sort of rite of power and liberation.’

Dora’s husband, Paul, remains a rather peripheral figure.  He comes across as moralistic, cold and possessive and I rather struggled to understand what could have been attractive about him to Dora.   However, he’s clearly deeply hurt by Dora’s desertion but unable to forgive her, to articulate his feelings or to show any warmth towards her that might provide hope of a full reconciliation.

And there’s Michael, always struggling to do the right thing but not always succeeding.  I found him the most empathetic character.  Betrayed in the past, he still feels guilty about his part in the circumstances that led to it and struggles with what he sees as a conflict between his sexuality and his faith.  An instinctive and momentary expression of his feelings threatens to bring to light his past actions and sets in motion a chain of events that will culminate in tragedy.

During one of the regular community meetings, one character says: “A bell is made to speak out.  What would be the value of a bell which was never rung?  It rings out clearly, it bears witness. It cannot speak without seeming like a call, a summons.” In fact, as events unfold, it becomes clear that confession can sometimes be dangerous self-indulgence or disguised retribution against another.  ‘There are moments when one wants to tell the truth, when one wants to shout it around, however much damage it does.’

Murdoch’s skill is to really let you see inside the minds of the characters so that the reader witnesses their (sometimes illogical) thought processes, their moral conflicts and their attempts at self-justification.  It doesn’t make them necessarily likeable but it makes them feel credible. 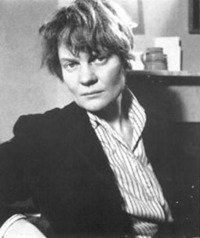 Iris Murdoch was born in Ireland in 1919.  A university lecturer and prolific and highly professional novelist, Iris Murdoch dealt with everyday ethical or moral issues, sometimes in the light of myths. As a writer, she was a perfectionist who did not allow editors to change her text. In 1956 Murdoch married John Bayley, a literary critic, novelist, and Professor of English at Oxford University.

Murdoch produced 26 novels in 40 years, the last written while she was suffering from Alzheimer disease. Her novel The Sea, The Sea won the Booker Prize in 1978. In 1987 she was made a Dame Commander of the Order of the British Empire. She died in 1999.  Murdoch was portrayed by Kate Winslet and Judi Dench in Richard Eyre’s film Iris (2001), based on Bayley’s memories of his wife.

5 thoughts on “Book Review: The Bell by Iris Murdoch”