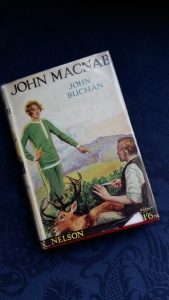 Three high-flying men – a barrister, a cabinet minister and a banker – are suffering from boredom. They concoct a plan to cure it. They inform three Scottish estates that they will poach from each two stags and a salmon in a given time. They sign collectively as ‘John Macnab’ and await the responses.

The details above are for the hardback edition in my Buchan collection (pictured above).  Those below are for a modern ebook/paperback edition.

John Macnab is the second book in my Buchan of the Month reading project.  It’s also a book from my Classics Club list.  Again, it’s a book I’ve read several times before.  To read more about my Buchan of the Month reading project, click here.  For a spoiler-free introduction to John Macnab, including details of its real life inspiration, click here.  Please be aware that the book includes depictions of hunting and shooting deer.

“The function of man is to live, not to exist.” Jack London, Tales of Adventure

This is a quote John Buchan would probably have agreed with, as the need for constant challenge in order to prevent decay of the body, mind and spirit is a common theme in his books.  In fact, he would probably take it even further, seeing lack of challenge as the first step towards a weakening of civilisation.  (He has one of his characters expound this view in John Macnab.) In just such a state of ennui do the three protagonists of John Macnab – all men in prominent public positions – find themselves at the beginning of the book.   Rather than steal a horse (which is Leithen’s doctor’s light-hearted advice to him) they embark on an adventure that will test their stalking and fishing skills, their physical stamina and risk their public reputations if unsuccessful.  ‘You’ve got to rediscover the comforts of your life by losing them for a little.’

Lawyer Edward Leithen (whom we met in The Power-House) along with banker, John Palliser-Yeates, and politician, Charles Lamancha, decamp to the Highlands basing  themselves clandestinely at the estate of mutual friend, Archie Roylance.  Then the fun begins as they attempt to outwit the forces arrayed against them.  The setting gives Buchan the opportunity to display his love of the Scottish countryside with some wonderful descriptions of the scenery.  ‘The strong sun was tempered by the flickering shade of the trees, and, as the road wound itself out of the crannies of the woods to the bare ridges, light wandering winds cooled the cheek, and, mingled with the fragrance of heather and the rooty smell of bogs, came a salty freshness from the sea.’

Although a Borderer by birth, Buchan has fun reproducing the Highland dialect of the local ghillies.  John Macnab is a light-hearted book and I certainly choose not to take as snobbery the delight the three men take in ‘dressing down’ as tramps or to be offended by some of their more unreconstructed views about social status.

As a backdrop to the exploits of the collective named ‘John Macnab’, there is a charming love story.  This features another familiar Buchan theme: the man who’s had little to do with women but falls head over heels when he meets someone who is his intellectual match.  ‘He saw in that moment of revelation a comrade who would never fail him, with whom he could keep on all the roads of life.’  [Isn’t that lovely?] In an echo of Mr Standfast (which is next month’s Buchan book) the gentleman concerned is attracted, amongst other things, by the fact the lady resembles ‘an adorable boy’.

Look out for my introduction to next month’s Buchan of the Month: Mr Standfast