Today I’m revisiting a book that I reviewed in the early days of my blog, Miss Treadway and the Field of Stars by Miranda Emmerson (published in January 2017).  I really enjoyed this period mystery set in 1965 in London’s Theatreland and gave it the full five stars.  I heard a rumour that the author is working on a sequel – I do hope so. 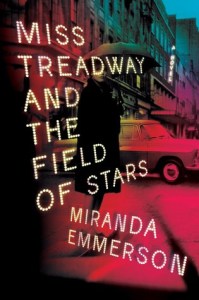 Soho, 1965.  In a tiny two-bed flat above a Turkish café on Neal Street lives Anna Treadway, a young dresser at the Galaxy Theatre.  When the American actress Iolanthe Green disappears after an evening’s performance at the Galaxy, the newspapers are wild with speculation about her fate.  But as the news grows old and the case grows colder, it seems Anna is the only person left determined to find out the truth.  Her search for the missing actress will take her into an England she did not know existed: an England of jazz clubs and prison cells, backstreet doctors and seaside ghost towns, where her carefully calibrated existence will be upended by violence but also, perhaps, by love.For in order to uncover Iolanthe’s secrets, Anna is going to have to face up to a few of her own…

Find Miss Treadway and the Field of Stars on Goodreads

At first, it seems as if Miss Treadway and the Field of Stars is going to be a straightforward period detective mystery but there are a number of elements that, as you read on, raise it to another level.

Firstly, the authentic feel of the period setting.  This is the England of homes without central heating, smoke-filled bars and buses, seedy clubs, drugs, awful coffee, backstreet abortions and, most shockingly, homophobia and overt racism against black people, Irish people and basically anyone who is perceived as an outsider.

Secondly, Miranda Emmerson has created such a great cast of supplementary characters, including Ottmar, the Turkish café owner, and Aloysius, the Jamaican accountant.   It is no accident that the characters who help Anna in her search for Iolanthe are all outsiders and perhaps it’s the fact that Iolanthe is also an outsider that makes them care so much for her fate.

Lastly, this is such a multi-layered novel because underneath the simple mystery narrative are questions of identity and reinvention.   All the characters have either reinvented themselves, wish to reinvent themselves or are struggling to play a part they haven’t quite come to terms with.  There’s Anna, who admits “I tried to be someone and I failed” and is drawn to starting over anew; Sergeant Brennan Hayes, who changes his Christian name and accent to disguise his Irish origins (“His new voice commanded more respect, his new name spoke of privileged beginnings.  He didn’t belong anywhere, he was aware of this, but he looked like he belonged, sounded like he belonged”) ; his wife, Orla, who empathises with Iolanthe’s determination that “one part of your life needs to end and another to begin”  when she realises that Brennan “just wasn’t who I thought he was at all”;  and Aloysius, who has moved to London because he is “in love with the idea of England” but the England of Dickens, which turns out to be a far cry from reality he experiences.

I was really impressed with this book.  At the end, there are questions unanswered but I’d like to think these were not unintended loose ends but deliberate on the part of the author or (even better) threads to be woven into a future book.  This was a great read that would keep you entertained for hours on a train or plane journey.

I received an advance review copy courtesy of NetGalley and HarperCollins UK/4th Estate in return for an honest review.

Miranda Emmerson is a playwright and author.  She grew up in south-west London before studying English at Oxford and Playwriting Studies at Birmingham. In her twenties she edited and wrote for charity and magazine websites, and scripted audio magazines for people with a learning disability. She has travelled extensively in Europe, North America and Asia. She lives in Wales with her husband and their two daughters.

She’s a regular contributor to BBC Radio 4 and BBC Radio 4 Extra (sometimes as Miranda Davies) where she specialises in adapting books for dramatic serialisation.

She is currently undertaking a PhD at Cardiff University looking at the history of BBC radio adaptation examining the dramatic adaptation of un-English writing for an Anglocentric medium.  She has published one work of non fiction – the travelogue Fragrant Heart – and one work of fiction – the novel Miss Treadway & the Field of Stars.

6 thoughts on “Throwback Thursday: Miss Treadway and the Field of Stars by Miranda Emmerson”