This Pulitzer Prize-winning classic tells the poignant tale of a Chinese farmer and his family in old agrarian China. The humble Wang Lung glories in the soil he works, nurturing the land as it nurtures him and his family. Nearby, the nobles of the House of Hwang consider themselves above the land and its workers; but they will soon meet their own downfall. Hard times come upon Wang Lung and his family when flood and drought force them to seek work in the city. The working people riot, breaking into the homes of the rich and forcing them to flee. When Wang Lung shows mercy to one noble and is rewarded, he begins to rise in the world, even as the House of Hwang falls.

England is in crisis. King Edward has no heir and promises never to produce one. There are no obvious successors available to replace him, but quite a few claimants are eager to take the crown. While power struggles break out between the various factions at court, enemies abroad plot to make England their own. There are raids across the borders with Wales and Scotland.

Harold Godwinson, Earl of Wessex, is seen by many as the one man who can bring stability to the kingdom. He has powerful friends and two women who love him, but he has enemies will stop at nothing to gain power. As 1066 begins, England heads for an uncertain future. It seems even the heavens are against Harold.  Intelligent and courageous, can Harold forge his own destiny – or does he have to bow to what fates impose?

There are three things you should know about Elsie. The first thing is that she’s my best friend. The second is that she always knows what to say to make me feel better. And the third thing… might take a little bit more explaining.

84-year-old Florence has fallen in her flat at Cherry Tree Home for the Elderly. As she waits to be rescued, Florence wonders if a terrible secret from her past is about to come to light; and, if the charming new resident is who he claims to be, why does he look exactly a man who died sixty years ago?

Cotton County, Georgia, 1930: in a house full of secrets, two babies-one light-skinned, the other dark-are born to Elma Jesup, a white sharecropper’s daughter. Accused of her rape, field hand Genus Jackson is lynched and dragged behind a truck down the Twelve-Mile Straight, the road to the nearby town. In the aftermath, the farm’s inhabitants are forced to contend with their complicity in a series of events that left a man dead and a family irrevocably fractured.

Despite the prying eyes and curious whispers of the townspeople, Elma begins to raise her babies as best as she can, under the roof of her mercurial father, Juke, and with the help of Nan, the young black housekeeper who is as close to Elma as a sister. But soon it becomes clear that the ties that bind all of them together are more intricate than any could have ever imagined. As startling revelations mount, a web of lies begins to collapse around the family, destabilizing their precarious world and forcing all to reckon with the painful truth. (Review to follow)

Death Comes for the Archbishop by Willa Cather (ebook)

The novel, written in 1927 concerns the attempts of a Catholic bishop and a priest to establish a diocese in New Mexico Territory.

It is based on the life of Jean-Baptiste Lamy (1814-1888), and partially chronicles the construction of the Cathedral Basilica of St. Francis of Assisi. The capture of the Southwest by the United States in the Mexican–American War is the catalyst for the plot. (Review to follow) 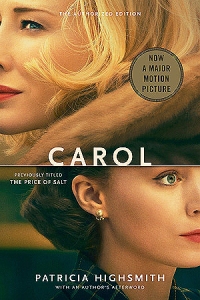 Carol (The Price of Salt) by Patricia Highsmith (paperback)

Two women from different backgrounds – one a department store clerk who dreams of a better life, one who is wealthy and married – strike up a love affair with each other in 1950s New York.

Written in 1952, the novel was originally titled The Price of Salt and published under the pseudonym Claire Morgan.

One warm, West Texas November night, a shy boy named Oliver Loving joins his classmates at Bliss County Day School’s annual dance, hoping for a glimpse of the object of his unrequited affections, an enigmatic Junior named Rebekkah Sterling. But as the music plays, a troubled young man sneaks in through the school’s back door. The dire choices this man makes that evening – and the unspoken story he carries – will tear the town of Bliss, Texas apart.

Nearly ten years later, Oliver Loving still lies wordless and paralyzed at Crockett State Assisted Care Facility, the fate of his mind unclear. Orbiting the still point of Oliver’s hospital bed is a family transformed: Oliver’s mother, Eve, who keeps desperate vigil; Oliver’s brother, Charlie, who has fled for New York City only to discover he cannot escape the gravity of his shattered family; Oliver’s father, Jed, who tries to erase his memories with bourbon. And then there is Rebekkah Sterling, Oliver’s teenage love, who left Texas long ago and still refuses to speak about her own part in that tragic night. When a new medical test promises a key to unlock Oliver’s trapped mind, the town’s unanswered questions resurface with new urgency, as Oliver’s doctors and his family fight for a way for Oliver to finally communicate – and so also to tell the truth of what really happened that fateful night.