Top Ten Tuesday is a weekly meme created by the lovely ladies at The Broke and the Bookish. The feature was created because they are particularly fond of lists and love to share lists with other bookish folk.

This week’s topic is Ten Favourite Books of 2017. Go on, choose an easy one then! I’ve read over 150 books so far this year and, although I think I’m fairly stingy when it comes to giving 5 star ratings, I’ve been lucky enough to read many that I believe deserve my highest rating. It has been an extremely difficult task to pick just ten and I’m sure if I did it again another day I might well pick a different selection, so many are there vying for this category.   If you’d like so see all the books I’ve read this year and how I’ve rated them, visit my Reading List 2017 page where there are links to all my reviews.

Here is my Top Ten (in no particular order) – click on the title to read my review. 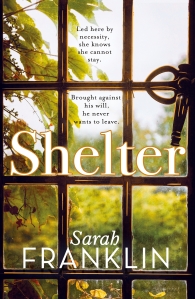 Set in World War 2, Shelter tells the story of Connie Grainger who, desperate to leave bad memories behind, joins the Women’s Timber Corps and is posted to The Forest of Dean to train as a ‘lumberjill’.

Chance brings together Connie and Seppe, an Italian POW, who is trying to escape his own demons. Their meeting offers an end to secrets and the possibility of new beginnings for both of them.

Inspired by the author’s own family history, this is a lovely story with two wonderful characters. Elsie Boston and Rene Hargreaves meet during World War 2 when Rene arrives to work as a Land Girl on Elsie’s farm. The book tells the story of how their relationship develops and how their life together is threatened by a visitor from the past and the unwelcome public scrutiny that follows. One of the many wonderful debut novels I read this year. Watch out for the blog tour to accompany the book’s publication in paperback in February.

These Dividing Walls by Fran Cooper

I really loved this debut novel set in an apartment building in Paris.

The inhabitants seem to represent a microcosm of society and their lives play out against a backdrop of tensions over unemployment, immigration and change which threaten to boil over in the sweltering heat of a Paris summer.

Days Without End by Sebastian Barry

Set in the America of the 1850s, Days Without End is the intensely poignant but, at times, harrowing story of two men and the makeshift family they create with a young Sioux girl. In Thomas McNulty, Sebastian Barry has created a distinctive and unforgettable narrative voice that helped win the book The Walter Scott Prize for Historical Fiction in 2017.

Set in AD 98 at the army base at Vindolanda, on the northern frontier of Britannia and the entire Roman world. Warring tribes and shifting alliances threaten its peace and security and it’s down to centurion, Flavius Ferox, to handle the situation.  Respected historian, Adrian Goldsworthy, creates what feels like an incredibly authentic view of life on the far reaches of the Roman Empire. Plenty of action and a cracking read for lovers of historical fiction or fans of Roman history.

The Watch House by Bernie McGill

Abandoned by her family, Nuala Byrne accepts a marriage proposal from the aging tailor on the island of Rathlin. When Nuala is sent to cook for engineers sent to Rathlin by Marconi to conduct experiments in the use of wireless telegraphy, she meets an Italian named Gabriel. As their relationship develops, Nuala begins to regret her previous decisions and dream about a different future. I thought the book was beautifully written with an atmospheric setting, characters I cared about, and an underlying sense of mystery. 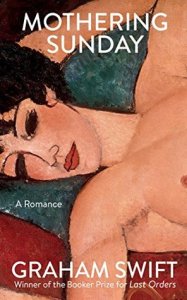 Shortlisted for The Walter Scott Prize for Historical Fiction, this was my first novel by Graham Swift but, on the basis of this one, won’t be my last. Set on Mothering Sunday in 1924, it has real narrative power as it takes a sudden, devastating turn a third of a way through, conveyed in just two simple sentences. It’s the story of an assignation between people of different positions in society on a pivotal day in both their lives but also a meditation on words, writing and story-telling. Small but beautifully formed.

The Wardrobe Mistress by Patrick McGrath

Set in London in 1947, the book recounts the events following the sudden death of actor, Charlie Grice, and the devastating secret about her husband that Joan, his widow (the eponymous wardrobe mistress) discovers. I loved the atmospheric period setting, intriguing mystery, well-developed characters, its very moving exploration of grief and betrayal and its joyful celebration of the theatre and insightful examination of the act of performance.

The Sixteen Trees of the Somme by Lars Mytting

The death of Edvard’s grandfather and the facts that come to light as a result, change everything for Edvard. They see him embark on a journey that will take him away from the isolated Norwegian farm where he has grown up to the Shetlands and France as he searches for the truth about the cause of his parents’ death when he was three years old and the four days afterwards when he was missing. An absolutely enthralling story with a fantastic sense of place created in each location.

If The Creek Don’t Rise by Leah Weiss

Yet another debut novel and a quite outstanding one, I thought. Set in a small community in the North Carolina mountains, it tells the story of Sadie Blue, married to a violent drunkard and facing a dead-end future. However, the arrival of a newcomer sets in motion a chain of events that offers the possibility of a different future for Sadie, if she has the courage and strength of mind to grasp it.

Stranger by David Bergen
Ares Road by James L Weaver
The Secret of Vesalius by Jordi Llobregat
The Good People by Hannah Kent
Bluebird, Bluebird by Attica Locke
Woman Enters Left by Jessica Brockmole
Maria in the Moon by Louise Beech
Mr Dickens and His Carol by Samantha Silva
Dance of the Happy Shades by Alice Munro