Throwback Thursday is a weekly meme hosted by Renee at It’s Book Talk. It’s designed as an opportunity to share old favourites as well as books that we’ve finally got around to reading that were published over a year ago. If you decide to take part, please link back to It’s Book Talk.

This week’s book is On the Edge of Sunrise (The Long Hair Saga #1) by Cynthia Ripley Miller. I recently read and reviewed the second book in the series – The Quest for the Crown of Thorns – for a blog tour, so I thought I’d share my thoughts about the first book. Having now read both books, I would say that either could be read as standalones but, at the end of the first book, you’re probably going to want to find out what the future holds for many of the characters. 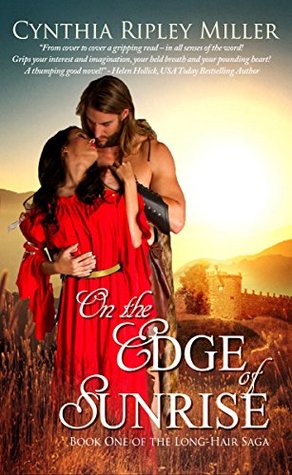 AD 450. The Roman Empire wanes as the Medieval Age awakens. Attila the Hun and his horde conquer their way across Europe into Gaul. Caught between Rome’s tottering empire and Attila’s threat are the Frankish tribes and their ‘Long-Hair’ chiefs, northern pagans in a Roman Christian world, and a people history will call the Merovingians.

A young widow, Arria longs for a purpose and a challenge. She is as well versed in politics and diplomacy as any man but with special skills of her own… The Emperor Valentinian, determined to gain allies to help stop the Huns, sends a remarkable envoy, a woman, to the Assembly of Warriors in Gaul. Arria will persuade the Franks to stand with Rome against Attila! When barbarian raiders abduct Arria, the Frank blue-eyed warrior, Garic, rescues her. Alarmed by the instant and passionate attraction she feels, Arria is torn between duty and desire. Her arranged betrothal to the ambitious tribune, Drusus, her secret enlistment by Valentinian as a courier to Attila the Hun, and a mysterious riddle – threaten their love and propel them into adventure, intrigue, and Attila’s camp. Rebels in a falling empire, Arria and Garic must find the strength to defy tradition and possess the love prophesied as their destiny!

Find On the Edge of Sunrise on Goodreads

The focus of the book is the battlefields of Gaul as the very existence of the Roman Empire is threatened by the marauding hordes of Attila the Hun.  To oppose them, a fragile alliance of Romans and Franks exists, largely on the principle of ‘my enemy’s enemy is my friend.’ Against this backdrop, individual struggles for power are played out, plots are made, alliances formed and broken.

The author introduces us to the key characters in the story, some of whose fortunes we will follow in the second book, The Quest for the Crown of Thorns (click here for my review). There’s Arria – recently widowed, accomplished, resourceful, shrewd – determined to fulfil her mission as envoy but aware of the vulnerability of her position, both as a woman and a potentially valuable hostage. There’s Garic – handsome, passionate, brave – attracted to Arria but conscious of the deep divide separating them. There’s Vodamir, Garic’s cousin – cocky, impetuous, loyal – whose daredevil instincts often threaten to place him in danger. There’s Marcella – beautiful, seductive, manipulative – who is seeking to secure a wealthy and powerful patron and who will use all her charms (and we mean all) to get it. Finally, there’s Drusus – handsome, ambitious, possessive and totally ruthless when challenged or threatened.

Passions run high, both on the battlefield and the bedroom. Readers who crave plenty of spice with their historical fiction will be well served (forgive the pun). The author keeps the action moving along apace with many twists and turns. Whilst some of the characters are imagined, many are not and the book makes reference to actual events giving the story an air of authenticity and credibility. It all adds up to a very enjoyable read for lovers of historical fiction who like an element of romance with their history.

I received a review copy courtesy of the author and Sage’s Blog tours in return for an honest and unbiased review.

Cynthia Ripley Miller is a first generation Italian-American writer with a love for history, languages and books. She has lived, worked, and travelled in Europe, Africa, North America and the Caribbean. As a girl, she often wondered what it would be like to journey through time (she still does), yet knew it could only be through the imagination and words of writers and their stories. Today, she writes to bring the past to life.

She holds two degrees and has taught history and teaches English. Her short fiction has appeared in the anthology Summer Tapestry, at Orchard Press Mysteries.com and The Scriptor. A Chanticleer International Chatelaine Award finalist for her novel, On the Edge of Sunrise, she has reviewed for UNRV Roman History, and blogs at Historical Happenings and Oddities: A Distant Focus.

Cynthia has four children and lives with her husband, twin cats, Romulus and Remus, and Jessie, a German Shepherd, in a suburb of Chicago.