Today’s guest on What Cathy Read Next is Shaun Ebelthite, author of White Water, Black Death. As someone whose idea of the perfect holiday is several weeks on a luxurious cruise ship visiting exotic places, the premise of Shaun’s novel – an outbreak of a deadly plague onboard a cruise ship – should have had me breaking out in a cold sweat. Instead, it intrigued me and I’m very much looking forward to reading White Water, Black Death (isn’t that a clever title?) just as soon as it reaches the top of my review pile. I just may not choose to read it while on my next cruise….

I’m delighted that Shaun has agreed to answer some questions about White Water, Black Death, the inspiration for the book, and his experience of being a first-time author. 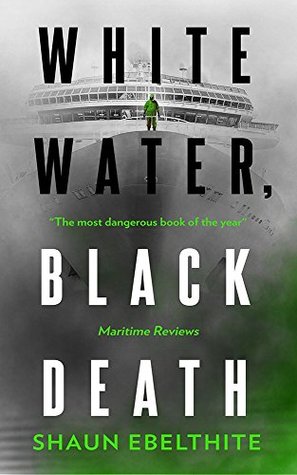 “A cruise ship is the perfect target for a biological attack”. These are the chilling words emailed to the Seaborne Symphony in the mid-Atlantic.

Magazine editor Geneva Jones has been sent on the trans-Atlantic cruise to help secure a major advertising agreement from the CEO of the cruise line, Rachel Atkinson, but her efforts to win her over are curtailed by a mysterious crew death. Geneva suspects foul play. Rachel insists its suicide. A former investigative journalist, Geneva can’t resist digging deeper, but what she finds is far more devastating. There’s an Ebola outbreak on the ship, everyone is trapped aboard and Rachel is trying to keep it secret.

Geneva knows enough about Ebola to be terrified, but she’s also onto the biggest story of her career. As panic surges through the ship, she becomes fixated on a single question. How was the virus brought aboard? The answer is worse than she could have imagined, and the greatest exposé she’ll ever get, if she can only prove it.

“This story will be every cruise ship passenger’s worst nightmare… no one is above suspicion. This is a fast-paced thriller that will have the reader on the edge of their seat.” (Reader’s Favorite)

“White Water, Black Death maintains a fast pace and keeps the reader guessing to the very last page. It may also be the most dangerous book of the year.” (Maritime Reviews)

Without giving too much away, can you tell me a bit about White Water, Black Death?

White Water, Black Death opens with a cruise ship Captain trying to decide whether to respond to an SOS call in the middle of the Atlantic, with a major storm bearing down on his ship, while a journalist he doesn’t trust is trying to pre-empt his every move. What neither of them, or any of the other characters, realise is that the entire ship is already a giant floating Petri dish, with the most dangerous virus of the 21st century crawling on every surface.  With White Water, Black Death, I wanted to tell a story that hadn’t been told before. Although there have been plenty of plague ship books and ‘outbreak’ type novels, none that I’ve read have focused on something that can happen so easily in real life, with ‘everyday’ characters to which I hope most readers will be able to relate. Instead of a CIA operative or doctor with the NSA, my characters are the people that would be on the frontline if a cruise ship really were the target of a biological attack.

How did you get the idea for the book?

When the Ebola virus broke out in West Africa, and cruise ships began cancelling port calls in the affected countries, I did a ship tour in Dubai and was handed a questionnaire asking about my travel history and current health. I realised then that a cruise ship’s only defence against a virus being brought aboard is a) the infected person knows they’re infected and b) that person is honest enough to tell the cruise line. It made me wonder what would happen if someone knowingly infected themselves with a deadly virus before entering a congested and isolated community, such as a cruise ship.

White Water, Black Death is your first novel so can you tell us a bit about your writing journey?

I wrote White Water, Black Death quite quickly; the main thrust of the story was finished in two or three months. The really time-consuming, but equally rewarding, part was editing it and re-writing it several times to flesh out the story with believable characters and events. I’ve been writing since I was a child, with dozens of unfinished manuscripts gathering e-dust, but this was the first one I managed to finish.  I think it was because I wrote out the major plot thread first, giving me a structure on which I could add and amend.

You have a lot of experience in the cruise industry. How realistic is the scenario at the heart of the book – an outbreak of a highly contagious virus?

It’s terrifyingly realistic. Your average cruise is a week to two weeks in length, while Ebola takes around two to seven days to show symptoms after infection. That makes it easily spreadable aboard a cruise ship because by the time people start showing symptoms, it would be too late to contain it. On a trans-Atlantic cruise, where a ship is at sea for up to a week without making any port calls, the consequences would be catastrophic. And that’s if any of the nearby ports could even provide help. In 2014 when a cruise ship had a passenger onboard who had only treated an Ebola patient (she had no symptoms) it caused panic and Mexico actually shut its maritime border to the ship.

The book describes the panic that sets in amongst the passengers once the outbreak becomes public. How did you approach writing those scenes?

White Water, Black Death is about the choices we make as people under extraordinary stress. It’s a pressure-cooker environment and I tapped into that emotion by using my writing as an outlet for the stress and feeling of being entrapped that I felt in my job. I was also writing the book through the night most days, as that was the only time I could set aside, and those feelings of exhaustion helped me tap into the kind of emotion I was trying to give my characters.

The characters in the book are presented with a number of moral dilemmas, such as the conflict between doing the right thing and commercial pressures. Is this something you feel strongly about?

Yes, but not in any ideological sense. I really wanted to tell a story that was nuanced, rather than black and white in terms of right and wrong. I think very few people are inherently selfish or ‘bad’ in the storytelling sense. Aaron wants to find out the truth about Chantal, his mother, Rachel, wants to protect her company, Geneva wants a good scoop and the Captain wants to protect the ship and its crew and passengers which may not necessarily fit with Rachel’s goals. The dilemmas they each face are (I hope!) true to life in the sense that they’re faced with questions that people would need to answer if this happened in real life.

What was the biggest challenge you encountered when writing White Water, Black Death?

Each of my characters has divergent goals, or things that they care about or want to protect in the crisis, but I’d like the reader to be sympathetic to the plight of each. I’m obviously not the best judge of whether I’ve succeeded, but trying to come close was the greatest challenge from a story telling point of view. In terms of the actual act of writing, the greatest challenge was finding time – inspiration can strike at the most inconvenient times!

Which other writers do you admire?

Patrick O’Brien and Douglas Reeman are my two favourite authors. Having to pick between them would be my own ‘Sophie’s Choice’ crisis.

Has writing your book put you off booking a trans-Atlantic cruise?

Not in the slightest. Cruise holidays are like Marmite for a lot of people. You either love it or hate it, but I definitely love it and even if I survived an ordeal such as that in White Water, Black Death, I would still always choose travel by ocean over anything else.

What are you working on next?

I’ve started writing a psychological thriller set aboard a luxury train in Africa. Its predominantly American and British passengers find themselves stranded in the wilderness when the train comes to a halt late at night on the first day of the trip. They’re told it’s because the railway line is badly maintained and they need to wait for repairs to be done, but then they hear rumours of a coup d’état, and foreigners are being targeted. I’m not sure where it’ll go from there, but that’s one of six or seven stories I’m kicking around.

Thank you, Shaun, for those fascinating answers. I know thriller fans are going to love the intriguing premise of White Water, Black Death.

Shaun Ebelthite was born in Namibia, raised in South Africa and educated in Dubai in the Middle East where he is a maritime and cruise journalist. He has been covering all aspects of ocean transport for more than five years and runs the Middle East’s foremost online cruise magazine. He has had two children’s books published, and is now branching out into a new genre with his first thriller, White Water, Black Death.