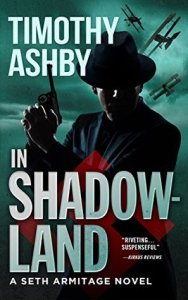 Praise for In Shadowland:

Find In Shadowland on Goodreads

Author Bernie McGill has written that, ‘As a fiction writer, I am always looking for the gaps between recorded events, the spaces in between’. Timothy Ashby, the author of In Shadowland, has certainly followed this path, creating an engaging conspiracy mystery out of a real life event – the death of Teddy Roosevelt’s son, Quentin, shot down over France in WW1.

Set in 1925, horrific memories of WW1 are never far away for Bureau of Investigation Special Agent, Seth Armitage, as he tries to uncover the truth about what happened to Quentin’s body. There are terrifyingly evocative descriptions of the horrors of that dreadful war and its lasting impact on Seth and others.

‘His first experience with war had been as a chronic assault on the senses. Exploding shells during the day interspersed with the rattle of machine guns. Screams from men in the throes of nightmares. Sobs from homesick farm boys who realised they’d made the biggest mistake of their lives in their eagerness to get Over There. Shots, shouts, screams and curses from trench raids. Jittery sentries popping off rounds at shadows. The omnipresent reek of sewage, cordite, gas and putrid corpses. Even the drinking water brought up in tin canisters on the backs of terrified donkeys tasted like death.’

Amongst the forces arrayed against Seth, prepared to stop at nothing to prevent him uncovering the truth, is a quite chilling villain, Peri Winslow. A perverted psychopath who gets a sadistic pleasure from torture and killing, he is the stuff of nightmares. Inspired by stories of murderous scavengers (or even ghouls and demons) said to have roamed No Man’s Land, Peri’s story is cleverly woven into the plot.

A key role in the story is given to Adolf Hitler at a time when he was a fledgling dictator and not everyone recognised the threat he posed or the malign influence he would come to have. There are echoes of Kate Atkinson’s Life After Life in the ‘what if?’ scenario the author explores as part of the plot.

I enjoyed the walk-on parts for celebrities of the period such as Sam Goldwyn, Scott and Zelda Fitzgerald, Rudolph Valentino, Gertrude Stein and Ernest Hemingway. I also loved how the narrative reflected the time it took in those days to cross the Atlantic by ship, or if you could pull some strings, by airship.

Although this is the second book featuring protagonist Seth Armitage and there are references to his earlier case, this book worked perfectly well as a standalone read. However, In Shadowlands entertained me such that I’d love to go back and read the first one at some point.

I received a review copy courtesy of the author and chose to give an honest and unbiased review.

To read an interview with Timothy Ashby about the book, its inspiration and his approach to writing, click here.

Try something similar…Revenants: The Odyssey Home by Scott Kauffman 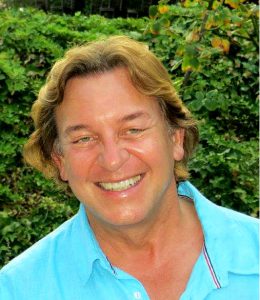 Timothy Ashby, author of the best-selling thriller Time Fall, worked in Washington, D.C. as a counter-terrorism consultant to the U.S. State Department, and a senior official at the U.S. Commerce Department. He held two Top Secret security clearances and worked with a number of colourful characters, including members of the U.S. military’s Joint Special Operations Command.  Before and after his career in Washington, Ashby led a peripatetic life. Born in the USA, he spent his teenage years in Grenada, where he learned to surf, sail and dive, and where his lifelong passion for history and archaeology was inspired. It was also in Grenada that he became passionate about writing, having the good fortune to be mentored by authors Martin Woodhouse and Dudley Pope. Mr. Pope named one of the characters in his Lord Ramage series “Captain Ashby,” in honour of the teenage Tim Ashby.

Ashby received his PhD in International Relations from the University of Southern California, an MBA degree at the University of Edinburgh in Scotland, and a law degree from Seattle University. A licensed attorney, he worked in Cuba and Eastern Europe on a variety economic development projects and has served as CEO of several global companies that he founded.

He is the author of the novels Time Fall, Devil’s Den and In Shadowland, and numerous articles. 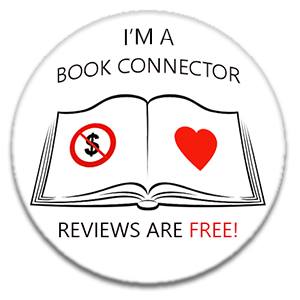 2 thoughts on “Book Review: In Shadowland by Timothy Ashby”