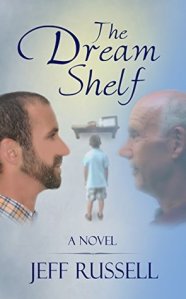 No pictures, no past and yet his dreams were left on the shelf. A book, a toy, a framed quote and a plaster bust represented the places Sam’s father wanted to see and things he wanted to do. But Robert Archer refused to discuss his background and when he died unexpectedly Sam was left with the bitter regret of a lost opportunity to learn more about his dad.  Things change with the discovery of a hidden yearbook, a list of names and a government document. Sam’s interest in his father’s life becomes a surreptitious tale that ignites a passion to know what happened to him and why his secrets could not be shared. He embarks on a quest for ‘his story’, one with both the promise of closure and the threat of learning more than he wants to know. The trail leads to Gus, a WWII veteran, and his daughter Karen, who is torn between helping Sam and protecting her father. Together they learn the dark secret behind the dream shelf, the high cost of integrity and the lessons a father left behind for his son.

Find The Dream Shelf on Goodreads

Following the death of his father, Sam sets out to discover more about the missing years in his father’s story, the years before his marriage to Sam’s mother. His motivation is not only to fill in the gaps in both his own ‘story’ and that of his father, it also piques his personal and professional interest in historical research. All Sam has to go on initially is a shelf of seemingly random objects belonging to his late father that Sam believes represented his father’s dreams. 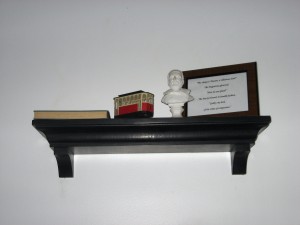 ‘High on the wall above the desk, beyond the reach of a young boy’s curious hands, was a small shelf that held an odd assortment of knickknacks. Privately Sam referred to it as the ‘dream shelf’, a repository for sacred possessions that likely came from dime-stores and garage sales… Not until childhood gave way to maturity did he realize their collective significance. The book about Manhattan and the model trolley car represented the cities of New York and San Francisco…while the framed literary quote and the plaster bust signified the arts and science.’

Then Sam comes across two other clues – a school yearbook and a list of names – which point to a new direction and set him off on a quest to find the missing pieces of his father’s life, to find out why his father never spoke about his past or tried to fulfil his own dreams, instead investing all his time and energy in Sam’s future. In fact, he starts to wonder if he really ever truly knew his father.

Sam’s very analytical, methodical approach to following up the clues is described in detail. Eventually he tracks down one of the people on his father’s list – Gus – but finds him similarly reticent about his wartime experience. Any answers Gus does give are seemingly riddles.  In the process of his investigation, Sam finds himself drawn to Gus’s daughter, Karen.  She is torn between wanting to help Sam, to find answers herself and protect her father’s fragile health. Eventually the mystery is unravelled but not before Sam (and Karen) have to face some uncomfortable truths.  Clearly the moral is be careful what you wish for. Sam comes to realise the actual meaning of the objects on the ‘dream shelf’ may be entirely different from that he had imagined.

The book explores some interesting moral questions such as whether it is ever right to do the wrong thing, such as disobey an order if it conflicts with a matter of personal principle. It also focuses on the impact the decision of a single person can have on the outcome of wider events. The author uses both the story of Sam’s father and that of a fictional soldier of the American Civil War (whose story is Sam is also researching) to explore these ideas.

I found the story really engaging and was eager to find out how the mystery would be resolved.  At times, I felt the writing was overly analytical with a little too much detail about the characters’ thought processes or the significance of their gestures, such as the way they held their cup of coffee.

‘She poured a cup of coffee, sat down and habitually wrapped the fingers of both hands around the thick, glazed mug. Embracing it this way gave her a sense of control, the guarantee that whatever troubled her at the moment was contained and therefore subject to objective analysis. It warmth suggested security, assuring her that any conclusion she reached was the correct one.’

Clearly the author is fascinated by the way people think and their decision making processes. I liked the developing relationship between Karen and Sam but, again, some of the dialogue felt rather stilted – more like therapy sessions than normal conversations you’d have on a dinner date or riverside walk. But perhaps I’m wrong and those are the kinds of conversations a historian and a counsellor do have in real life! I found the events towards the end of the book very moving but its theme of coming to terms with the past and moving on injected a welcome note of hope for the future at the end of the book.

I’d like to thank the author for my review copy which was provided in return for an honest review.

Try something similar…Revenants: The Odyssey Home by Scott Kauffman (click here to read my review)

Jeff: I am a tale-spinner. My childhood heroes were Jules Verne and Victor Appleton II, architects of fantastic adventures. Hemingway stepped in when I discovered that the trials and triumphs of real people – those with limited physical and financial resources – were even more intriguing than science fiction. Today I try to follow that example with my own characters. They are the ‘you and me’ of the world, ordinary people facing extraordinary circumstances, beaten down perhaps and yet determined to succeed. Invariably they find adventure, romance and self-fulfilment, as should we all. When not absorbed in the pages of some new author or hammering away at my latest manuscript I can be found living and running in Stowe, VT.

3 thoughts on “Book Review: The Dream Shelf by Jeff Russell”