For Sarah Gilchrist, even medicine can be deadly

Publisher’s description: Sarah Gilchrist has fled from London to Edinburgh in disgrace and is determined to become a doctor, despite the misgivings of her family and society. As part of the University of Edinburgh’s first intake of female medical students, Sarah comes up against resistance from lecturers, her male contemporaries, and – perhaps worst of all – her fellow women, who will do anything to avoid being associated with a fallen woman…

When one of Sarah’s patients turns up in the university dissecting room as a battered corpse, Sarah finds herself drawn into Edinburgh’s dangerous underworld of bribery, brothels and body snatchers – and a confrontation with her own past.

To pre-order/purchase The Wages of Sin from Amazon.co.uk, click here (link provided for convenience, not as part of any affiliate programme)

The author has created an interesting, at times, feisty character in Sarah Gilchrist who, in the face of opposition from society and family, is training to be a doctor at a time when this was considered an unsuitable occupation for a woman. When a prostitute she encountered while volunteering at a community infirmary turns up dead on the dissecting table, Sarah’s instincts are to suspect foul play. For personal reasons linked to her own past, she feels an affinity with the dead girl and a determination that her death should not just be another unsolved murder of a ‘fallen woman’.

‘Someone had done this to her, and enough people had failed to care that murder had gone unnoticed.’

A theme running through the book is the unequal treatment of women by society: economically, politically, intellectually, sexually.

‘Society lady or scullery maid – no matter what our future held, we were expected to go about it looking as though we had never even conceived of having an opinion about anything.’

Sarah’s own back story reinforces this message as the reader learns of past experiences which have scarred her both mentally and physically.   To learn of the attitudes and actions of that time is quite shocking.  Occasionally, a little bit of me felt the message about the unfair treatment of women at the hands of men – although completely justified by the historical evidence – got a little repetitive. I found myself thinking: OK, I get the point!  However, perhaps this a message that can never be repeated too often.

Some elements of the mystery at the heart of the novel went in directions I expected but others certainly did not. Along the way Sarah ventures up some of the same dead-ends and falls for the same red herrings as the reader. There were some good twists as the solution to the mystery was unravelled. The book also nicely sets up the story for future books in the series.

I received an advance reader copy courtesy of NetGalley and publishers, Headline/Tinder Press, in return for an honest review.

Try something similar…Affinity by Sarah Waters 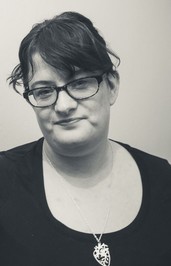 Kaite Welsh is an author, critic and journalist living in Scotland. Her novel The Wages of Sin, a feminist historical crime novel set in Victorian Edinburgh, is out in 2017 from Pegasus Books in the US in May and Headline/Tinder Press in June. It is the first novel featuring medical student, fallen woman and amateur sleuth Sarah Gilchrist, with two further books due in 2018 and 2019. Kaite’s fiction has featured in several anthologies and she writes a regular column on LGBT issues for the Daily Telegraph as well as making frequent appearances on BBC Radio 4’s Woman’s Hour. In 2014 she was shortlisted for both the Scottish New Writers Award and the Moniack Mhor Bridge Award. She has also been shortlisted for the 2010 Cheshire Prize for Fiction and the 2010 Spectrum Award for short fiction.

2 thoughts on “Book Review: The Wages of Sin by Kaite Welsh”