I’m delighted to be one of the hosts for today’s stop on the Blog Tour for The Summer House Party by Caro Fraser. Caro has kindly agreed to answer some questions about the book, its inspiration and her approach to writing. 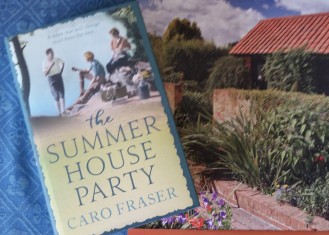 In the gloriously hot summer of 1936, a group of people meet at a country house party. Within three years, the country will be engulfed in war, but for now time stands still as they sip champagne on the lawn, engaging in casual flirtations and carefree conversation. Then a shocking death puts an end to their revelry, changing everything in an instant.  For all of them, that summer house party will be a turning point. The mistakes made during that fateful weekend will change their lives forever.

To purchase The Summer House Party from Amazon.co.uk, click here (link provided for convenience, not as part of any affiliate programme)

Without giving too much away, can you tell me a bit about The Summer House Party?

Hard to put such a long novel into a nutshell, but here goes….The book opens in the idyllic summer of 1936, three years before the war, at the country home of Henry Haddon, a famous society painter, and his wife Sonia. A group of friends – some young, some old, some wealthy, some less so – have been brought together for a week to enjoy the country house pleasures of tennis parties, picnics, and tea on the lawn. As the warm, lazy days unfold, intrigues and rivalries develop among the younger guests, and then a sudden death, like a foretaste of the war to come, puts an end to the party. In the years that follow the events of that week continue to haunt their lives, and as the country heads into war they must try to reconcile the choices and mistakes they have made….So there you have it – a blend of wartime romance and intrigue, ration books, spam, and a bit of sex!

Where did you get the idea for the book?

I’ve always loved English fiction of the 1930s and 40s, and wanted to write a novel set in that era. The run-up to the war, and its dramatic effect on everybody’s lives, struck me as a wonderful theme for a novel, and a country house party seemed the ideal setting for the opening, as it’s the perfect way to introduce characters and to depict events that are going to affect their lives for years to come. I also liked the idea of having a dramatic event early on in the novel – in this case the death at the house party – that resonates years later, because it gives scope for a sequel, or even a series, which I particularly enjoy writing. Everyone knows that feeling of getting to the end of a book and wanting to know more. That’s the way I want my readers to feel, so that they need to find out what happens next with the characters. I’m often quite curious myself! I’m already halfway through the sequel to The Summer House Party, and am hoping it may lead to a third novel.

Your previous books, such as your Caper Court series, have had a contemporary setting.  What tempted you to enter the world of historical fiction?

Partly a fascination with the period in which the novel is set. I think women of my generation have an affinity with the era just before the war, because it’s the world of our mothers and grandmothers, and while we may not remember it, we feel a connection through photographs and family stories. We’re intrigued by the domestic lives that women led back then, especially amid the hardships of war, and it was interesting to try and evoke that world, and to write at a length and pace that I think fits the time. I greatly admire the writing of certain novelists of that era, such as Dorothy Whipple and Winifred Holtby, who recognised that ordinary and everyday events possess their own drama, and who write about them with such elegant understatement and wry humour. I would love to think that I caught their spirit.

The Summer House Party is set just before the Second World War.  What were the challenges in creating an authentic picture of life in that period?

Catching the tone of the pre-war period was the challenge I most enjoyed – the way people spoke and thought, their assumptions and prejudices – and I found that steeping myself in the fiction of the day was the best way to capture the right voice. At least I hope it’s right! It also gave me an excuse to read lots of lovely novels from that period. As to the part set during the war, people have a very good idea through films and documentaries of what life was like then, so getting the detail right was very important.

How did you approach the research for The Summer House Party? Do you enjoy the process of research?

I do enjoy research, but there’s always the danger of getting so caught up in it that you waste time, so I try to focus on what I really need. It’s also important as a novelist to wear research lightly – you might learn a thousand fascinating things about what life was like in the blackout, but readers don’t want a history lesson. So I might read pages of stuff just to finish up with one scrap of information that I can use to give the thing authenticity. My research for The Summer House Party, apart from reading a lot of fiction of the time, was fairly scatter-gun and involved a lot of googling – the internet can throw up random and fascinating information that you didn’t even know you were looking for. In fact, one of the key plotlines in the book is based on a true story that I stumbled across during my research – it took one of the characters, Paul, in a direction I’d never considered.

What is your favourite and least favourite part of the writing process?

My favourite part is when I think I know where the story is going, but then a character does or says something I hadn’t anticipated – I find myself thinking, ‘Hold on, he wouldn’t do this, he’d do that instead’, and it takes the story in an unexpected direction. It’s great when characters really take a hold of you in that way, because they become like real people. It’s for that reason that I never plot things very tightly when I start a book.  My least favourite bit is when I get stuck on plot, and just can’t see a way ahead. That is a huge downer, and sometimes it takes a few days to resolve. But I always know it will resolve itself. I just go to the gym or do a bit of gardening and let the thing work itself out in my head.

Do you have a special place to write or any writing rituals?

I write in a space that is like a small study just off our kitchen area, with a window overlooking the garden, which is lovely at this time of year. My space is full of books, pictures of my children, a big David Bailey photo of Lennon & McCartney, and random stuff that I like. My writing day is fairly structured – start work at 9, coffee and biscuits at 11, lunch at 1, gym or a swim at 3 – but it’s flexible, too, and I often go up to town to have lunch with friends with whom I worked when I was a lawyer. Apart from that I don’t have any rituals. I work on a Mac, and when I’m travelling I work on my Ipad. I don’t understand people who can only write on translucent vellum with specially sharpened pencils or whatever – writing is a job and you should be able to do it with a biro on the back of an envelope, if you have to. It’s the words that count.

What other writers do you admire?

One of the writers I most admire most is Hilary Mantel. I wish I could write like that! I feel like throwing an armed guard around her until she finishes the next in the Wolf Hall trilogy. For sheer genius, John Updike. For the best characters and plots, Dickens. For the best storytelling, Stephen King. For fun, P G Wodehouse or Irvine Welsh.

What’s your favourite way to engage with your readers?

By getting them into the minds of the characters, so that they can identify with everything those characters are thinking and feeling. That’s what gives a book momentum, every bit as much as the plot.

What are you working on next?  Will it be more historical fiction?

I’m in the middle of the sequel to The Summer House Party, which is set in London in the 50s and 60s, so I suppose someone like my twenty-three year-old son would regard that as historical! The good part is that I can actually remember how things were back then, but I still do a lot of research because you forget details – like slang that people used, the places they frequented, the clothes and make up they wore. Janet Street Porter’s memoirs are proving very useful… Then I have promised myself – and fans of the Caper Court series – that I’ll get going on number 8 in that series. I’m very much looking forward to meeting up with those characters again – they feel like old friends.

Thank you, Caro, for those fascinating answers.  The gorgeous cover already had me enticed but now there is the prospect of a sequel and even a third book, I can’t wait to read it!

Caro Fraser is the author of the bestselling Caper Court novels, based on her own experiences as a lawyer. She is the daughter of bestselling Flashman author George MacDonald Fraser.