Today’s guest on What Cathy Read Next is Jeannie Zokan, author of the coming-of-age story, The Existence of Pity. Jeannie grew up in Colombia, the setting for her book. Below you can find a selection of photographs Jeannie has taken of places that feature in the book alongside some short excerpts she has chosen from The Existence of Pity.

Growing up in a lush valley in the Andes mountains, sixteen-year-old Josie Wales is mostly isolated from the turbulence brewing in 1976 Colombia. As the daughter of missionaries, Josie feels torn between their beliefs and the need to choose for herself. She soon begins to hide things from her parents, like her new boyfriend, her trips into the city, and her explorations into different religions. Josie eventually discovers her parents’ secrets are far more insidious. When she attempts to unravel the web of lies surrounding her family, each thread stretches to its breaking point. Josie tries to save her family, but what happens if they don’t want to be saved? The Existence of Pity is a story of flawed characters told with heart and depth against the beautiful backdrop of Colombia.

The setting of my novel, The Existence of Pity, comes from my youth. I grew up as a missionary kid in Colombia, South America, but I certainly didn’t experience the conflict Josie faced. This is a picture of our house as it looks now. The current owner has made it more beautiful, but I miss the towering bougainvillea around the front door.

This is Plaza de Caycedo and here is an excerpt from The Existence of Pity in which it features: 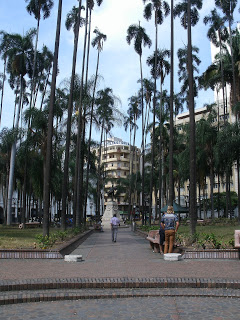 Cali’s downtown streets swarmed with people as we headed toward the park to sit on thick concrete benches under towering palm trees. Some Colombians were dressed for work, moving quickly past us, while others relaxed with their friends in jeans and T-shirts.

“That looks fun,” I said, pointing to a group kicking a soccer ball around.

“Yeah.” Aunt Rosie leaned back and closer her eyes. “Do you realize, Josie, we could be anywhere in the whole world?”

“I don’t know; it just seems like people are the same wherever you go. Every city has a park for people to hang out in, and it usually has a statue of an important person in the middle.” She opened her eyes and pointed to the bronze image of a man clutching a flag. “Who is that, anyway?”

“I’ll go find out.” I jumped up to read the plaque. Returning, I told her the statue was of a man who helped Cali gain its freedom from Spain. The park had been a public market in the 1600s.

As cathedral bells rang out, I looked around the old park with new eyes, wondering how much – or how little – had changed in three centuries. When the bells finally stopped chiming, I pulled out my camera to take pictures.

“I’m glad you like your new camera,” Aunt Rosie said.

“Maybe I’ll become a photographer for National Geographic one day.” I took a picture of the statue with palm trees behind it, then one of the soccer ball flying in the air. “I’ll travel the world, visiting all those parks.” 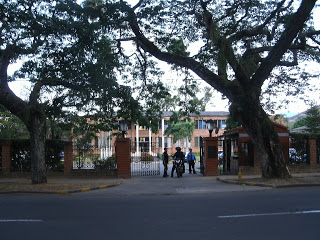 Here is a photo of the Cali Baptist Seminary across the street. Although much of the land has been sold, the open fields and grand buildings make the place as impressive as ever.

Here’s an excerpt from The Existence of Pity featuring the seminary:

The Baptist college campus was the only place where I felt truly safe in Cali.

Even in my house, with Brandy barking at anyone who passed by, I felt a vague sense of unease, that I wasn’t completely protected. But the seminary was surrounded by a high brick and metal fence, and a gun-wielding guard was on duty at all times. I could roam the wide open space in peace, missing Aunt Rosie and thinking about Alejandro. 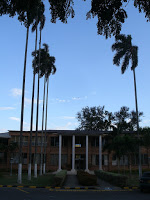 I wandered around the campus the day Aunt Rosie left, ending up in the library on the second floor of the main building. Only a few students were sitting at the tables between the bookshelves, and I walked out to the balcony, where bougainvillea was taking over. I liked to study the scale model of old Jerusalem on display in a glass case, with its tiny people and elaborate temple.

After a glance at the model, I looked around to make sure no one was watching me. I stole inside the library again and searched among the concordances, books on ancient languages, and inspirational stories, until I found a book about the saints. Flipping through its pages, I came across the perfect saint for my problems. I wrote his name on a piece of paper and headed back home.

I hope that has whetted your appetite to read The Existence of Pity knowing the author’s unique connection with the book’s setting (it has mine!).

Jeannie Zokan grew up in Colombia, South America, where she read almost every book in the American school she attended. Her love of books led her to study Library Science at Baylor University then to attend The George Washington University in DC. When the chance came to head south, she took her motorcycle to Florida’s Gulf Coast to write stories for the local newspaper. She now lives ten minutes from the beach with her husband, two teenage daughters, and three pets, all of whom keep her inspired and just a little frantic. She enjoys aerial yoga, tennis, and holding NICU babies as a volunteer. But there’s always writing. Writing to relive, writing to understand, writing to remember, writing to renew.

5 thoughts on “Jeannie Zokan: Bringing The Existence of Pity to Life”