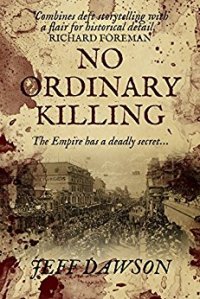 Intriguing and entertaining murder mystery set during the Boer War

Description (courtesy of Goodreads): December 1899, South Africa. Global superpower Great Britain is mired in an unexpectedly brutal conflict with the upstart Boers.  Captain Ingo Finch of the Royal Army Medical Corps pieces together casualties from the battle for Kimberley. On leave in Cape Town and awoken at his lodgings by local police, he is informed that a British officer has been murdered in a city backstreet.  Shocked by the identity of the victim, the bizarre nature of the crime and what appears a too-convenient resolution, Finch seeks answers before returning to the Front.  The sleuth soon turns fugitive, thrust into a perilous scramble through a maze of intrigue and espionage — with feisty Australian nurse, Annie Jones, as his accidental accomplice. Way to the north, Mbutu Kefaleze, a diamond mine runner, leads a band of tribal refugees on a trek across the vast Karoo. Their discovery of a white woman and her daughter wandering in the desert fuels their fear — that a lethal supernatural force has been unleashed upon the wilderness. All have stumbled upon a deadly secret, the revelation of which would shake the Empire to its core…

This is an impressive debut with a convincing period setting and a strong narrative full of twists and turns as the plot unfolds against the background of the Boer War. The “no ordinary killing” of the title refers to the death of an army colleague of the protagonist, Captain Ingo Finch. The story is told both from his point of view and from the point of view of Mbutu Kefaleze, a native runner (and to a lesser extent, Annie Jones, a volunteer nurse).   I found the story line involving Mbutu was particularly well-told and engaging. Although she plays an important part in events in the latter half of the book, I felt the character of Annie Jones could have been developed further with the reader given more from her own point of view.

The different strands of the story run in parallel with the reader left to guess at the connection between them until the point the author chooses to reveal it.   The mystery is sustained well right to the end of the book with plenty of action, intrigue, red herrings, secrets, murder, lies and “who can you really trust?” moments along the way. The plot zips along helped by the alternating points of view and relatively short chapters usually ending with an element of suspense. I particularly liked the walk-on part for the creator of a famous detective.   This is a very enjoyable historical mystery with an interesting period setting.

I received an advance reader copy courtesy of Endeavour Press in return for an honest review.

To pre-order/purchase No Ordinary Killing from Amazon, click here

Jeff Dawson is a journalist, author and screenwriter. He has been the US Editor of Empire magazine and a long-time feature writer for The Sunday Times’ Culture section. His non-fiction books include an approved biography of Quentin Tarantino; the football history Back Home (“Truly outstanding” — The Times), and WW2 shipwreck tale, Dead Reckoning, nominated for the Mountbatten Maritime Prize. No Ordinary Killing is his first novel.

One thought on “Book Review: No Ordinary Killing by Jeff Dawson”