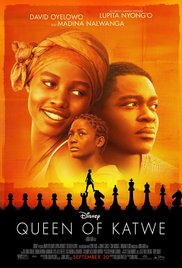 About the Book: The Queen of Katwe by Tim Crothers

Subtitled “A Story of Life, Chess, and One Extraordinary Girl’s Dream of Becoming a Grandmaster”,   the book tells the true story of Phiona Mutesi, a girl from the Katwe slum area of Kampala, Uganda. Nine-year old Phiona’s aptitude for chess is spotted by an inspirational mentor, Robert Katende, a war refugee turned missionary. Soon chess offers her the tantalising possibility of finding a route out of poverty and hardship.  She joins Katende’s group of “Pioneers” and it soon becomes obvious that she has a special talent. By the age of eleven Phiona is her country’s junior champion and at fifteen, the national champion. Phiona’s dream is to one day become a Grandmaster, the most elite title in chess. But to reach that goal, she must grapple with everyday life in one of the world’s most unstable countries, a place where girls are taught to be mothers, not dreamers, and the threats of AIDS, kidnapping, and starvation loom over the people.

Read my review of the book here.

Queen of Katwe is directed by Mira Nair from a screenplay by William Wheeler, based on the book by Tim Crothers.   It stars David Oyelowo as Robert Katende, newcomer Madina Nalwanga as Phiona and Lupita Nyong’o as Phiona’s mother, Nakku Harriet.

More information about the film can be found here.

The film was shot largely on location in the Katwe slum area of Kampala, Uganda giving it remarkable authenticity. It gives a realistic picture of the poverty, crime and sheer daily struggle that is the everyday experience of the inhabitants of Katwe. Their exposure to the vagaries of the elements is also dramatically illustrated. As with many film adaptations, it chooses to focus on a few key characters and amends and elides certain events for dramatic appeal. For instance, in reality (as Tim Crothers’ book makes clear), the Sports Outreach organisation that supported the “Pioneers” group was the work of many other people, not just Robert Katende, although it’s true he did the most one-on-one work with the children.  In that regard, David Oyelowo gives a compelling performance as Robert Katende and the performances of the actors playing the children who make up the “Pioneers” are remarkable, especially newcomer, Madina Nalwanga, as Phiona.

The film, Queen of Katwe, is a feel-good movie with some charming, humorous moments to offset the more serious themes.  It probably leaves the viewer with a more positive message about Phiona’s future prospects in the world of chess than is the situation in real life. The film is visually stunning with excellent performances from both leading and supporting cast.  Since I found the book stylistically a little stodgy, although packed full of factual detail, on this occasion I think the film wins out over the book.

One thought on “From Page to Screen: Queen of Katwe”